This October 31st is not just Halloween. It is the eve that took away one of the most passionate and remarkable young actors that the nineties had to offer.
Born 23rd August 1970, River Phoenix was an American actor noted for the amount of depth, sensitivity and intelligence he brought to the characters he portrayed on screen during his career. He was one of the most promising young actors of his generation and if his life hadn’t been cut short on 31st October 1993, he could have been as successful as Brad Pitt, Tom Cruise and Keanu Reeves.
From an early age River struggled in life, from his family being members of the Children of God/Family International cult to moving to South America and then appearing in television commercials. He was literally thrown into the deep end at such a young age that his feet never really touched the ground again. By his early teens, River was acting professionally and got his first break in the movie industry in science fiction fantasy family film Explorers (1985). It wasn’t really until he got a role in the 1986 hit movie Stand Be Me however that his name became known and his drug habit began. After many years and many films including The Mosquito Coast (1986), A Night in the Life of Jimmy Reardon (1988), Little Nikita (1988) and Running on Empty (1988) the recognisable River Phoenix we had come to adore from Stand By Me was gone and a new River with long hair and untidy appearance was introduced.
Several films later and River was given the role of a narcoleptic street hustler opposite Keanu Reeves in Gus van Sant’s My Own Private Idaho (1991). It was here that River Phoenix was established as a serious actor and no longer a teenage heartthrob; River’s drug habit at the time was much worse than anyone, including those around him could imagine. Next he stared in Sneakers (1992) and Silent Tongue (1993) where he was very convincing in his role of a man going mad, but with all the facial expressions and twitching, it was hard to tell if he was acting or actually intoxicated. Next came Thing called Love (1993) and Dark Blood and it was at this point that River’s habits were becoming much more notable by those around him and due to his death Dark Blood was left incomplete until 2012 where missing scenes were replaced by director commentary.
Throughout his career Phoenix had disliked being seen as a sex symbol and a heart throb. He would have much preferred that people comment on his acting and musical ability in his band Aleka’s Attic. It is for his incredible talent as an actor and musician that we celebrate the life of River Phoenix on this October 31st, as it was this time 22 years ago that his lost his battle with addiction, as an overdose took his life at the tender age of 23. He was a passionate and dedicated actor and will always be remembered for the life, energy and passion he bought to his roles. Two decades after his death he is still one of the most talked about young actors, unfortunately for all the wrong reasons. 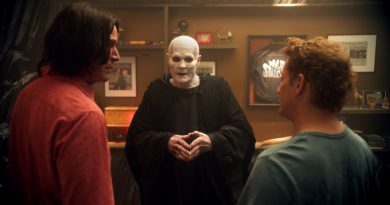 Bill and Ted Face the Music gets a most excellent trailer