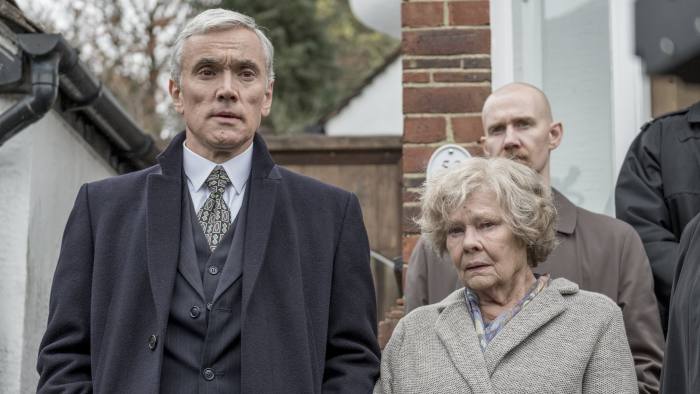 Joan (Judy Dench) is an apparently sweet little old retired librarian lady pottering about in her suburban home with her watercolours and her gardening.  Until that is the police show up one day and arrest her for spying.

We then in time honoured fashion move into telling the story of her past in flashback, in which Joan is played by Sophie Cookson, first as a student at Cambridge in the fifties, where she meets and falls for charismatic young Jewish communist Leo (Tom Hughes) and is befriended by glamourous but definitely dodgy fellow student Sonja ((Tereza Srbova).

After Cambridge she gets a job as assistant (for which read secretary) to British scientist Max (Stephen Campbell Moore), who is working on developing a British atomic bomb.  Their relationship develops into a love affair, but he is of course married   And, not in pique but in the interests of world peace, she leaks his work over the years to her Russian friends.

The main weakness of the film is that nearly all the story is in those extended flashbacks with little of interest in its present.  Dench is terrific as usual but her role is seriously underwritten.

Most of the time she is just called on to be the apparently bewildered little old lady, until she finally reveals her strength and passion in her climactic speech to her QC son Nick, which is the only good scene Dench gets.  It would have been interesting to know more about who she is now, to have more revealed about the past through her present day actions and her relationship with Nick – a role in which Ben Miles makes good use of his limited opportunities.  Nina Sosanya is also good as the police office interrogating Joan but little is actually revealed in those scenes. Rather than yet another shot of older Joan looking pensive and then going into flashback, it would have linked the past to the present more strongly if more of the story was being revealed through these present day interactions.

Sophie Cookson gives a competent performance as young Joan but there is little either physically or in the characterisation to convince us that she is the young version of her older self.  The character comes over as a bit bland, lacking fire and conviction and gives us little indication of her internal conflict over her moral dilemma that we hear older Joan voicing later.

Although the physical look of the late thirties, forties and fifties is correct, the flashbacks aren’t convincing in terms of conveying the feel of the times.  For example, we are told in dialogue about the sexism of the period, as in the fact that women graduates were awarded certificates, not a degree but with one exception those sexist attitudes don’t in the main show themselves as part of the characters’ everyday live lives, while the scenes set in the forties have little if any feeling of a nation at war and the subsequent deprivation of the post war years.  The period feel is most convincing in the early scenes of youthful idealism at Cambridge.

Hughes is good as the fiery Leo, though one is left wondering why a Jew who had escaped from post revolution Russia had become such a passionate communist. Sonja however is a mere spy movie cliché.  We could have done with seeing more of William (Freddie Gaminara) Joan’s former fellow student, who goes into the foreign office and is our best link to the Cambridge spy cabal of the thirties with which we are familiar.

The most convincing and complex character is Max with his passion for scientific knowledge while ignoring its implications and most particularly in his moral views about his feelings for Joan, which are very much of the period.

The script is adapted from a novel by Jennie Rooney, itself inspired by the true story of Melita Norwood, a British scientist and civil servant, who gave secrets to Russia over a period of four decades through her job at a facility researching the construction of an atom bomb. She was predictably described as the “granny spy” when she was unmasked in the late 90s.

This is a potentially really strong and interesting story but director Trevor Nunn could have told it a lot better.   And it is disappointing in the way he fails to make best use of Dench, who is after all the lure to get us into the cinema.