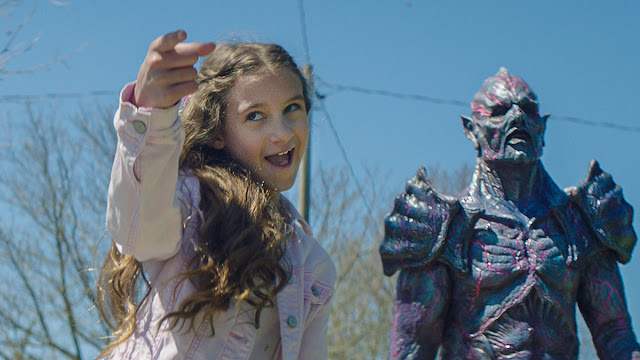 If you like your family comedies with buckets of gore, this sci-fi-fantasy-horror is well worth a look.

Mimi quickly ascertains that the holder of the gem controls the bloodthirsty monster, who she names Psycho Goreman (Ninabar), or PG for short.

PG has quite a story to tell: many centuries ago he was exiled from the planet Gigax after leading a slave rebellion against the ruling Templars. He blew his cred by subsequently taking his wrecking crew on a galaxy-wide rampage, killing everything in sight. The Templars struck back and eventually buried him on Earth.

Not that Mimi is listening to PG’s story – she’s too busy thinking about her next round of Crazy Ball, the game she made up and with which she keeps Luke in a position of stunned servitude.

Now that PG is this side of the turf, he wants to get the gem back from Mimi and start killing again. Unfortunately, until he has the gem, he must do everything Mimi tells him to do, including dressing up funny and playing Crazy Ball.

Meanwhile, back on Gigax, the governing council detects that PG is back in play and sends female warrior Pandora (Kristen MacCulloch) to sort things out.

Where are the parents, I hear you ask. Greg (Brooks) is very much the spaced-out, goofy slacker; Susan (Hancey) is doing extra shifts at the pharmacy to make up for Greg’s lack of provision for the family.

This is a fun film to watch for several reasons, none of them due to Mimi’s increasingly annoying manners.

The film has a great line in bathos, where PG’s epic badass curses and statements – such as “I will drink the screams from your lips for all eternity” – are roundly ignored or met with a pre-teen shrug of the shoulders.

This becomes even more effective when deployed in relation to PG’s narrated flashbacks, which are rendered in lovely fantasy art detail – just briefly, before being unceremoniously shortened.

The cosmic special effects are good, but so are the gross-out gory, planet-bound violence effects. It’s a pity that the film has a 15 certificate as I think younger children would approve of the disgusting comic ingestions and excretions and bodily eruptions here.

Greg the dad’s character highlights (by extreme contrast with PG) that PG is a metaphor for fantasies of parental control; even if the film focuses on the corrosive bubbliness of strong-minded siblings.