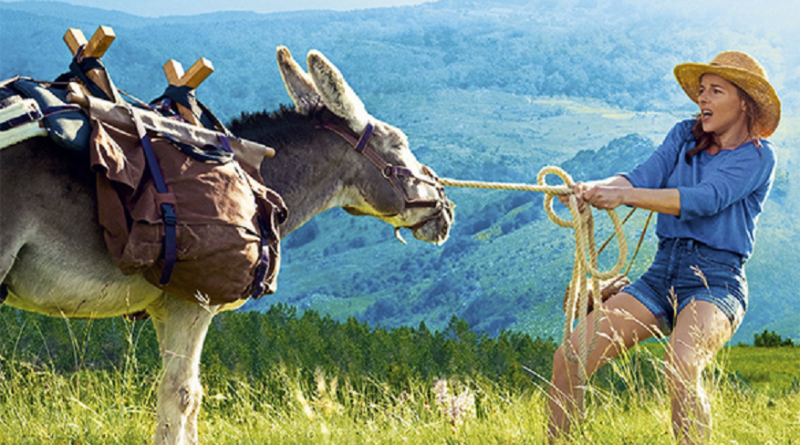 This is a delightful, very French film which will surely brighten your day! We meet Antoinette (Laure Calamy from Call My Agent) in her classroom with a full class of 8-year-olds.

We soon find out that she is having an affair with Vladimir (Benjamin Lavernhe), the father of one of her students. Expecting to share a week’s summer vacation with Vladimir, Antoinette is upset to hear that he is cancelling and instead going to the Cevennes with his wife (played by Olivia Cote) and daughter.

On the spur of the moment the 40 plus teacher decides to follow her lover and undertake the same hike along the Cevennes trail, which is famous for being the path that Robert Louis Stevenson took in 1878. He was accompanied by a donkey and wrote the famous book, Travels with a Donkey in the Cevennes about his trip. Antoinette books the hike and hires a donkey.

When she arrives at the first stop, she is rather upset to find she is the only one in the group who has a donkey, the others are on foot. And the donkey, Patrick, is not just an ordinary donkey; he has a mind of his own. When he is not walking really slowly, he is at a full stop. Antoinette finds that the only way she can get him to move is to talk to him and sing just as she does with her class of young children.

Although Vladimir is not at the first hotel, Antoinette does meet up with him and his family. What she finds out makes her think again about her affair with the married man. The relationship between the lover and Antoinette is explored but, to me, the real love affair is that between Antoinette and her donkey!

Laure Calamy is absolutely delightful as the middle-aged teacher embarking on a travel adventure. Full of charm and sincerity, she makes those she meets fall for her and manages both her lover and the donkey…just about. Benjamin Lavernhe is also fairly charming as the lover and we can believe that he really thinks he has control over both his wife and mistress.

There are some lovely views of the French scenery and director, Caroline Vignalman has achieved a most competent joining of the scenery, the actors and the story. It’s an amusing, very obviously French-made film with more than a touch of Gallic attractiveness. Now, can we give a special Oscar award to Patrick, a very special donkey?