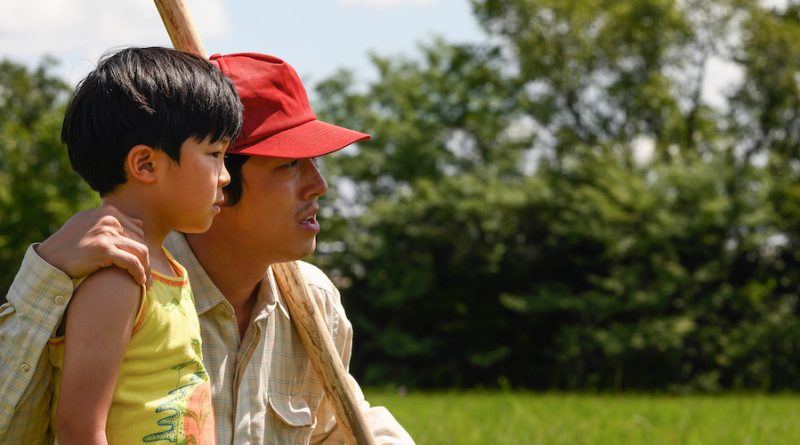 Based on writer-director Lee Isaac Chung’s childhood growing up on a farm in Arkansas, Minari is the story of a similar Korean immigrant family’s experience in the 1980s.

After ten years of poverty working as a chicken sexer in California, Jacob (Steven Yeun) moves his family to a small and run down Arkansas farm where he aims to create his own version of the American dream by growing Korean vegetables for the increasing number of Korean immigrants to the country who are eager for a taste of home.

As a business plan it’s not ideal.   For a start the farm has a serious water shortage.   And Jacob’s wife Monica (Yeri Han) is not impressed by the trailer home which is their farmhouse.  Monica is also worried about the health care of their small son David (Alan S. Kim) who has a heart murmur and a habit of wetting the bed.  It is largely through David’s eyes, as Chung’s alter ego, that the tale is told.  The fourth member of the family is David’s older sister (Noel Cho).

Family tensions increase when Monica’s mother (Youn Yuh-jung) moves in with them.   She is a delightfully outspoken woman, who initially conflicts with young David.  Grandma has brought some minari seeds with her from Korea to add to the farm’s potential crops, being the traditional Korean herb which gives the film its title.

Apart from Jacob’s fervently religious farm hand (Will Patton) the family appear to be very isolated from the rest of the world.  They do at one point try going to the nearby church but the encounters they make with members of the congregation don’t develop into much in the way of community inclusion for them.

Although most of the dialogue is in Korean, using English where appropriate, this is in many ways a traditional American tale of the immigrant’s dream of making good in the promised land.   Maybe one reason why it has been acclaimed with a clutch of Oscar and BAFTA nominations and a Golden Globe win.

It is beautifully filmed and acted and, despite Jacob’s often desperate struggles to make the farm work and the often noisy conflict between him and Monica, the film overall still has that feeling of quiet dignity and restraint which the West associates with Eastern culture.   Not until the film’s unexpected climax is there anything in the way of high drama.

MINARI is available now on demand and in virtual cinemas.