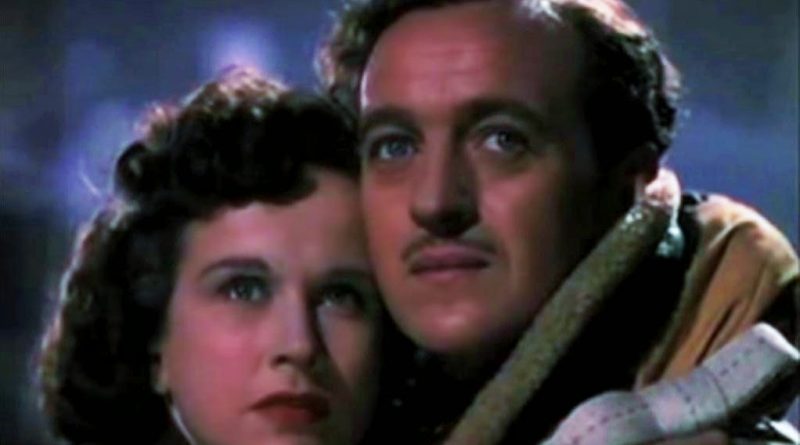 After a brief tour of the universe, with narration by possibly the voice of God himself, we are introduced to Sqdn Ldr Peter Carter (David Niven), a seemingly doomed RAF bomber pilot and sometime poet, alone in his burning aircraft, his crew either bailed out or dead. In the last moments before his plane crashes he makes contact with an American born radio operator, June (Kim Hunter). Peter dictates a letter to his mother and sisters and exchanges rudimentary information with June, before jumping from the plane (without his parachute), Peter says, “June, you’re life, and I’m leaving you,” a clear indication that, under different circumstances, Peter and June might jut have had a future together.

Peter washes ashore on a beach, when he comes round he assumes he has died. Spotting a naked boy in the sand dunes, playing a flute, surrounded by goats he asks where he needs to go, but soon realizes that he hasn’t passed over, but instead has miraculously survived the jump from the damaged plane. In the distance he sees a lone figure cycling along the beach, running over he finds an American girl, within seconds, they recognize each other and ecstatically embrace. An impossible romance blossoms between Peter and June.

The romance is soon put in jeopardy when French aristocrat, Conductor 71 (Marius Goring) appears interrupting a cosy, night-time picnic. Conductor 71 informs Peter that thanks to the thick English fog, a mistake has occurred that allowed Peter to escape the conductor’s grasp. He should, in fact be dead, and a place in Heaven has already been reserved for him. Peter refuses, claiming that Heaven’s oversight has directly led to a change in his circumstances – the fact he’s now in love, which otherwise he wouldn’t have been.

At he same time, Peter’s physical health has taken a turn for the worse. He’s plagued by headaches, forcing June to seek the help of Doctor Reeves (Roger Livesay), the village doctor who also happens to have some expertise in neurology. Reeves diagnoses brain damage that can be only repaired with surgery. Conductor 71 reappears, informing Peter that his request for a stay of his sentence has been granted, pending appeal to a celestial court. Peter has to assign a defence counsel, he can pick anyone, from any time period, as long as they’re dead.

Increasingly obsessed and distraught over who to pick for his defence counsel, Peter’s physical condition worsens. As surgery begins, so too does his celestial trial, set in a vast amphitheatre that seems to extends into infinity, with both the prosecutor and the defence counsel given rocky pulpits from which to address their audience, presided over by a heavenly judge ,with Abraham Farlan (Raymond Massey) as the American-born prosecutor and Peter’s surprise defence counsel appearing at the last moment.

The argument centres on the impossibility of a romantic love affair between a British pilot and an American girl, not to mention the briefness of their relationship, colonial history (Britain coming off badly),and, ultimately, on the redemptive power of romantic love. With the legal arguments reaching an impasse, the court descends to Earth, where the strength of Peter and June’s love is put to one final test.

A Matter of Life and Death was produced, written, and directed by Michael Powell and Emeric Pressburger,originally as a propaganda film to improve Anglo/American relations. Some will see it as a romantic fantasy, elevated from other entries in this genre by inventive visual design, the scenes set on Earth filmed in glorious, over saturated Technicolor, Heaven in stark contrast shot in monochrome, hinting at what we lose when we die, plus cinematography which despite the film being over sixty years old has stood the test of time.

Others will see it as a thoughtful, profound meditation on romantic love and the driving forces behind the universe. A Matter of Life and Death is an example of the perfect marriage of style and substance, of the visual medium of film and narrative form,