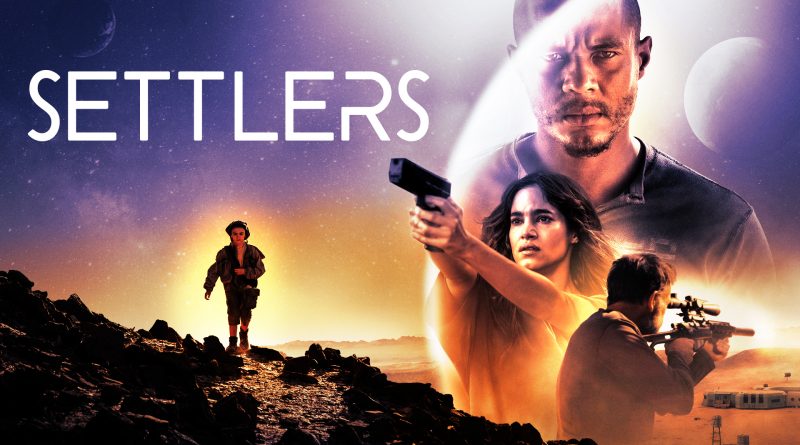 Mars – aka the Red Planet – has exerted a fascination with humankind ever since it was first glimpsed through a telescope in the 17th century, and later was thought to be inhabited by intelligent beings. Would they be friendly? Could humans ever live there – and dare we try?

In the new sci-fi thriller SETTLERS, a family (Sofia Boutella, Jonny Lee Miller and Brooklynn Prince) have made their home in a barren wilderness on Mars, following an ecological disaster on Earth. Their seemingly idyllic – if remote and lonely – lifestyle is torn apart when a dangerous stranger intrudes into their compound. It’s not the first time the planet has been used as a cinematic backdrop – here’s a look at the Top Ten films set on Mars.

Paul Verhoeven’s wildly imaginative film, based on a short story by Phillip K Dick, sees Arnold Schwarzenegger as a man taking a ‘virtual vacation’ to Mars using a memory implant. Unfortunately, this triggers a series of memories where he remembers being a secret agent fighting the corrupt Mars administration. He decides to travel to the Red Planet itself to separate fact from fiction – and that’s when the real fun begins..

Matt Damon stars as an astronaut stranded on Mars in this Golden Globe-winning sci-fi drama directed by Ridley Scott (Alien). Left for dead by the rest of his crew, Damon must use his resourcefulness to survive, and try to send a signal to Earth that he is still alive, The film made over $600million worldwide, suggesting Mars is a rather profitable sci-fi location.

With Earth becoming uninhabitable, a mission is launched to Mars to see if the planet can be lived upon by humans, in this sci-fi thriller starring Val Kilmer and Carrie-Anne Moss. If Elon Musk is serious about colonising Mars, he might want to give this film a peek beforehand to be forewarned about some of the possible obstacles to his plan!

A real turkey from the Sixties, in which Santa is kidnapped by Martians so they can have someone to give the alien kiddies presents! As you can see from the trailer, it’s a pretty dreadful film – the Mars setting is painfully cheap and the Martian costumes unconvincing, and the less said about the acting and plot the better – but it does have one very advantageous features – if you put on at Christmas it’s a surefire way of getting rid of unwanted house guests.

Another vintage Mars sci-fi, and a precursor to The Martian, with an astronaut stranded on the planet, with a monkey for company, trying to figure out a way to survive. The film claims to be ‘scientifically authentic’, although whether aliens that use slave bracelets to control their prisoners is based on fact is uncertain. Adam West appears in the film, two years before he found fame as TV’s Batman.

One of two survivors from a doomed trip to Mars can’t recall what went wrong with the expedition – but scientists must find out what happened to her, if they are to save her surviving companion who has an alien life form attached. Through a series of flashbacks we begin to find out the terrifying and dangerous secrets of the mysterious planet.

In John Carpenter’s spooky and atmospheric sci-fi horror, Pam Grier and Jason Statham star as a part of a Mars police unit sent to a remote mining post to pick up a dangerous criminal. When they get there, they discover the inhabitants of the outpost seem to have been possessed – by Martian ghosts!

Brian De Palma, another big name Hollywood director, along with the likes of Verhoeven and Ridley Scott, has journeyed to Mars to expand his cinematic universe. Here, Tim Robbins and Gary Sinise are part of a rescue mission to discover what happened to the first manned spaceflight to Mars. Of course, things don’t run at all smoothly!

In this sequel to the hit alien-on-the-rampage sci-fi horror, an astronaut is infected with alien DNA on a mission to Mars, and when he returns to Earth he transforms into a vicious creature that goes on a gruesome, seemingly unstoppable rampage. The lesson seems to be, don’t visit Mars! And if you do, don’t bring anything back.

This striking sci-fi film is a cross between an old school western and a cutting edge sci-fi, with the barren Mars landscape providing a suitably forbidding backdrop to a story about survival and loyalty tested to breaking point. Here, Mars is at least habitable, and food can be grown and some semblance of normal life can be led. But the settlers haven’t reckoned on the single biggest problem facing them on a new planet – each other.