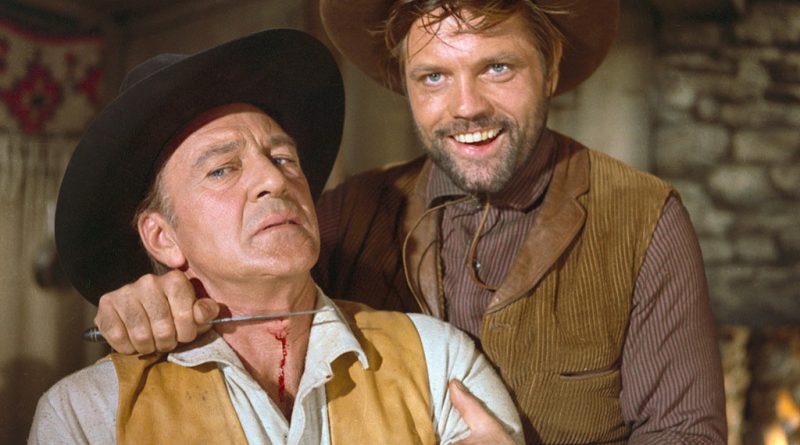 Part of the award winning series Masters of Cinema, Man of the West is the pinnacle film in the brilliant film career of director Anthony Mann (El Cid and Winchester ’73).

The story follows Link Jones (Cooper), a reformed outlaw who is a passenger on a local train when it is robbed by local bandits. Along with two change companions, Sam the professional gambler (O’Connell) and Billie the saloon girl (London) they try to find refuge for the night. By chance, the three stumble upon a barn not far from the robbery that is home to Link’s crooked uncle and cousins. He is forced to rejoin his old outlaw band, blackmailed into returning to the life of crime he tried so desperately to escape.

Man of the West is a gritty, violent film as Link tries desperately to protect Billie and Sam. Gary Cooper is excellent, remaining quiet and thoughtful throughout.

Mann’s direction is immaculate, his cinematography exposing the beautiful vast desert landscape as the film reinvents the Western with every shot. An early example of modern cinema, each scene plays upon the idea of extreme realism, to dramatic effect.

The film focuses on the destructive relationship between Link and his uncle Doc (Cobb) who is the head of the sadistic gang. The fact that Cooper had once been a member of this gang brings an interesting perspective, as Cooper’s character is not as innocent as the audience at first believes him to be.

This is evident in the dramatic fight scene between Cooper and Lord, as Link humiliates his cousin in the same way he made London’s character suffer earlier. After lingering on this ritual humiliation for longer than seems necessary, the film goes on to really hold its own in two major fight scenes.

The final shootout is a master class in tension building as Mann pits two cousins against one another, as a foolhardy scheme to steal from the local bank turns sour. Stylistically, there’s at least one technical innovation here as Mann keeps both the man shooting and the man being shot in frame at the same time, employing the Cinemascope frame wonderfully.

When Link starts killing, the film refuses to pass judgement – even his motivation is unclear: does he kill because he has to or because he wants to? The bleakness of the film’s ending must be attributed to Anthony Mann’s honesty on the subject, as he consistently emphasises the horror of killing.

With excellent performances by the entire cast, Man of the West is arguably Mann’s best film, earning its reputation as one of the finest westerns produced in the studio era. Perhaps its only fault is that London’s character Billie really has little to do as Link’s fake girlfriend, except play the victim.

This home entertainment release is loaded with special feature bonuses that include interviews and behind-the-scenes and documentary footage that was recorded exclusively for the Masters of Cinema series, featuring film critics Glen Henry and Farrah Smith Nehme as well as commentary by Douglas Pye.

Douglas Pye’s video essay sees Man of the West as the culmination of Anthony Mann’s preoccupation with redefining the male hero of the Western – the irrevocable split between his ‘outlaw’ and ‘homesteader’ aspects creating a crisis of male identity. Probably correct, but it seems like very old hat to mention it (even Pye notes that the source for this idea is a book from the late 60s).

Surely, the most immediate, most unique and noteworthy element of the film is Mann and cinematographer Ernest Haller’s visual sense, with dynamic shots highlighting character trajectories across the huge Cinemascope frame. Not only are the shots well-composed, they often feature complex, symmetrically opposed in-frame movements, even two or three counterbalancing or opposing movements – which is spellbinding to watch. For example, a shot in the ghost town of Lasso with two gang members converging on Cooper’s character (one over a roof, one at street level), who is in close-up in the foreground.

Planes of foreground and middle distance are traversed and revealed as dynamic layers. The layers of the shot resemble (as later when the surviving gang member and Cooper shot it out through the floor of a derelict house) geological strata. This fits with a similar aspect in many of Mann’s James Stewart westerns, most explicitly in The Naked Spur where opening act and climax are played out around very similar outcroppings of rock. It’s not so much that the characters appear against the backdrop of a grand natural environment; they themselves seem to cling to the rock, to emanate from the dusty, dead rock itself, rising from it, returning to it, being an elemental part of it. This epic-geological vision is what makes Mann’s westerns unique and striking.

Man of the West is out in a dual format edition on 23 March.     Buy from Amazon