This film has an interesting background, in that the story is set in and was shot in America but is written and directed by Scandinavians, led by Norwegian director Trier.  It has a French, Irish and American cast and was funded from Europe. Trier’s previous films, “Reprise” and “Oslo, August 31st”, were made in his native Norwegian.  They received critical acclaim outside Norway but with this one he wanted to reach a wider and more international English-speaking audience with his European way of telling stories.

The title comes from The Smiths’ compilation album, which was aimed at the American market, though it also indicates the emotional “noise” of the family conflicts in the film, taking a metaphor from the fact that the character played by Huppert is a war photographer.

The story concerns a now all-male family – widowed father Gene (Byrne), his teenage son Conrad (Druid) and elder son Jonah (Eisenberg), who is now married and a new father and is somewhat estranged from his father and brother.  They are brought back together by an upcoming exhibition of the work of their mother, Isabelle (Huppert), a famous and much admired war photographer, who died three years earlier.  As the three men are forced to share space again, Gene tries to make a connection with his two sons, as the three of them attempt to come to terms with their unresolved and all very different memories of Isabelle

The film has a very good cast, though Amy Ryan as the father’s sometime girlfriend is a bit under used.  Its main thrust appears to be about the difficulty males have in expressing their feelings – a universal theme, which is as appropriate for America as Northern Europe.  Potentially the most interesting character is Huppert as the late wife, whom we only see in flashback but she remains to us, as to her family, something of an enigma.  We discover that she has had an extra marital relationship with her colleague Richard (David Strathairn) but the film doesn’t go into this in any great detail.   It would also have been enlightening to have seen more of her in action doing the job which she loved but which came between her and her family.

The real focus is on the trio of men.   Despite good work from Byrne, the direction and performance are overall so super-restrained in their depiction of this emotionally repressed character that it is difficult to empathise with him.   Like the film itself, the character is intriguing but rather cold and distant.  Eisenberg as the older son also remains, like his mother, a bit of an enigma.  The character is most alive in the early scenes with his wife and baby.  Druid as Conrad is for a lot of the film a rather typical and annoying movie-style dysfunctional teenager, though his character comes endearingly to life in the scene near the end of the film with a teenage girl from school, whom he fancies.  The most powerful and emotionally involving scene is one between Richard and Gene, when the former admits that he was Isabelle’s lover, in which you can really feel the two men’s conflicting feelings. 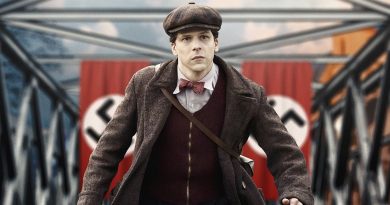 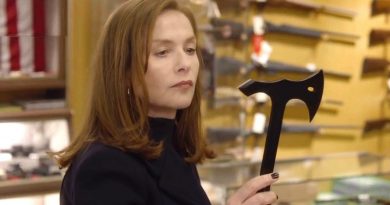