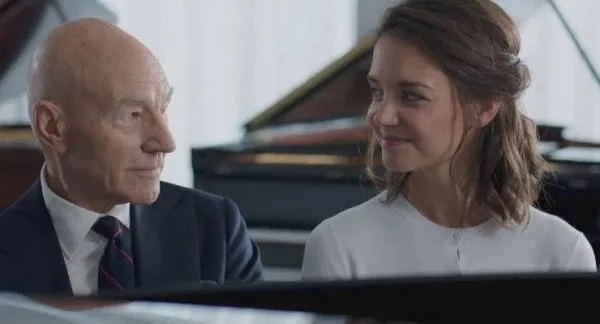 Come for Patrick Stewart, remain for the glorious music and lovely photography. Then stay longer to appreciate the charm of Katie Holmes and the expertise of the rest of the cast. The film does not have an unusual theme: young female journalist interviewing older musician who is troubled and suffering from stage anxiety which affects his concert appearances.

Katie Holmes, as Helen, manages to entice Sir Henry Cole (Sir Patrick Stewart), a renowned pianist who is reaching the end of his career, into giving her an interview for a profile she is writing. Although Henry has taken time out after the death of his wife, he is still so full of anxiety that both before and during his concert performances that his erratic behavior is of concern to his fans and his manager and agent Paul (Giancarlo Esposito).

Helen helps Henry through a number of his episodes of stage fright and soon becomes indispensable to him and accompanies him to his gigs. But when Henry is alone in Sils-Maria in the Swiss Alps, he has a lot of time to reflect on the past as well as his present life. He plays chess with the Night Porter, Felix (Christoph Gaugler), then thinks back to the time before his adored wife died suddenly.

Helen’s article appears in the New Yorker. In it she praises Henry. Although there seems to be a growing ageless romance between the two, nothing really romantic ever happens and the relationship remains chaste.

Always a great stage actor, Stewart excels in film as well. It is illuminating to see all the different emotions flit across his face as he listens to music or plays music or just sits remembering the past. His eyes tell us as much about his feelings as his beautiful voice when he responds to Helen’, “I love you Henry.”

Holmes gives a nicely reserved portrayal of the young music critic enthralled with the virtuoso piano player. And, in a small part, Giancarlo Esposito gives a sympathetic performance as Henry’s agent and friend. The beautiful solo piano playing of lovely classical music is provided by Serhiy Salov.

Claude Lalonde directs with a gentle style giving us lovely scenery and bringing outstanding performances from his two stars.