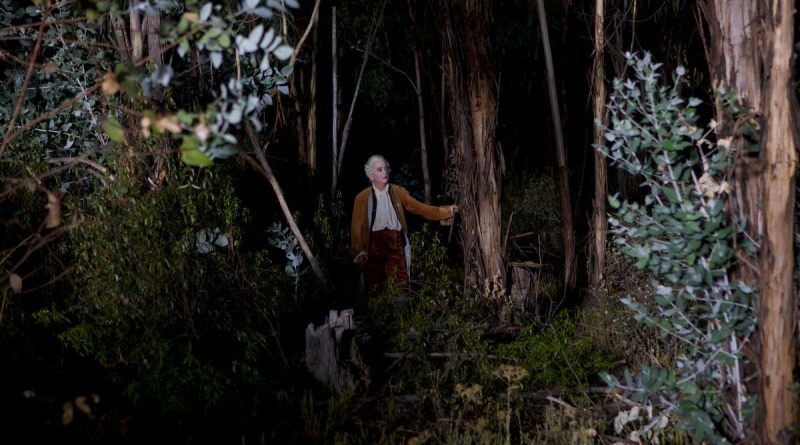 A period drama about sex and libertinage that manages to be both intense, immersive and tedious. Liberté encapsulates the exasperations and provocations of slow cinema rather well, but it may be considered obscene by some of the arthouse audience – and not sexy enough for the wank-at-home crowd.

There’s less happening than you might expect. Yes, a woman is hung naked from a tree and drenched in a milky substance; one male aristo spends a rather long time snuffling around the backside of another woman. There are cocks, flaccid, on display. Hairy paunches too. But, mostly, ghastly faced older men with disconcerting looks in their eyes creep around the forest tugging at their crotches and looking at each other.

Most of the time, they actually look off screen in an anxious manner. Serra takes a classical “tableau vivant” approach to the setting, but set up 3 cameras, which recorded 30 hours of material, to capture the antics of his actors. They were often unsure whether what they were doing was being recorded; thereby disconcerted out of giving performances in the usual sense … and even out of knowing which way to look.

The infamously tedious work of the Marquis de Sade is an inspiration for Serra. His 3-camera set ups and tableau-based approach accomplish something similar to Sade’s catalogue style in the working through of variations of obscenity. The action is decentred, its significance dissipated. An air of listlessness and exhaustion pervades the hanky panky.

Serra also notes Bunuel and Fassbinder as influences. But with its fastidious tableaux and kinky historical subject matter, Liberté reminded me of a Peter Greenaway film, albeit one in which cast and crew have had their grubby paws in the ketamine jar.

If you find Liberté an immersive experience, it probably isn’t because of the sex or the dialogue. It is probably the susurrations of the digitally enhanced night including the ticking of crickets and the sounds of a storm, which are wonderfully heightened on the soundtrack. Even the sounds that relate to the action of the film, such as the impact of swishing birch on flesh, the grunts of pain and ecstasy, fold into this wider ambience.

Liberté is out on Bluray on 11 January.