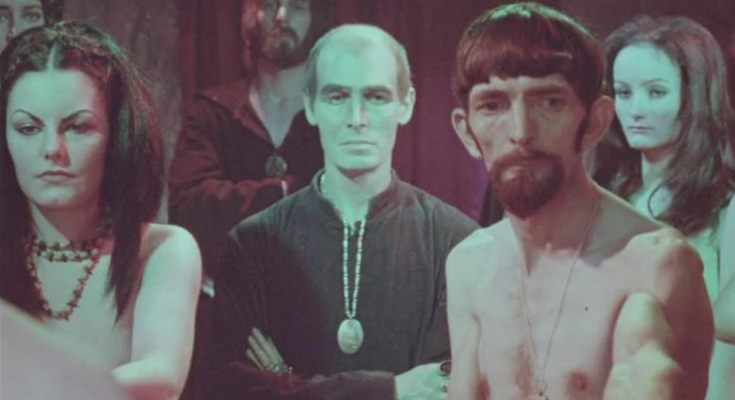 Just in time for Halloween, here comes a well-curated set of features and extras about witches in the UK (and northern France) from the decade that taste forgot. As a package, it is informative, somewhat thought provoking, hilarious and tacky.

Legend of the Witches is the more sober offering, a history of paganism and witchcraft in the British Isles and Celtic bolt-ons. It explores the syncretic nature of both paganism and Christianity down the ages, as well as visiting Boscastle’s Museum of Witchcraft and Magic. There are also extended ritual sequences, involving witch-du-jour Alex Sanders.

Legend of the Witches is filmed in high-contrast monochrome which gives a weighty tone to proceedings and works especially well in the long, reflective natural shots and during the extended coven scene set in a forest.

Alex Sanders also features heavily in Secret Rites. It turns out he is surprisingly deadpan for a man in contact with dark, primeval forces.

In Secret Rites, you’ll also meet young hairdresser Penny, who likes the sound of witches and so gets initiated into a Notting Hill coven – along with a man called Brian.

Secret Rites is definitely a trashier film than Legends of the Witch, but all the more fun for it. The sets look like something off the original Star Trek series, all lurid 70s colours, painted tin foil and polystyrene rock walls. It’s not just tacky: the imaginatively dramatized rituals nod to the ideas from the first film.

The extras are great too. In fact, if you really want a hoot, I recommend watching the episode of TV series Out of Step collected here. In it, your posh-as-plums host Daniel Farson (as a youngster he was patted on the head by Adolf Hitler, who called him “a good Aryan boy”) speaks to several batshit crazy types who have an interest in Wicca. Everyone’s accent and manner are beyond weird, so much so that you’ll think you are high.

A fitting climax to this wild at heart and weird on top offering from the BFI.

Legend of the Witches and Secret Rites is out in a dual format edition on Monday 14 October.