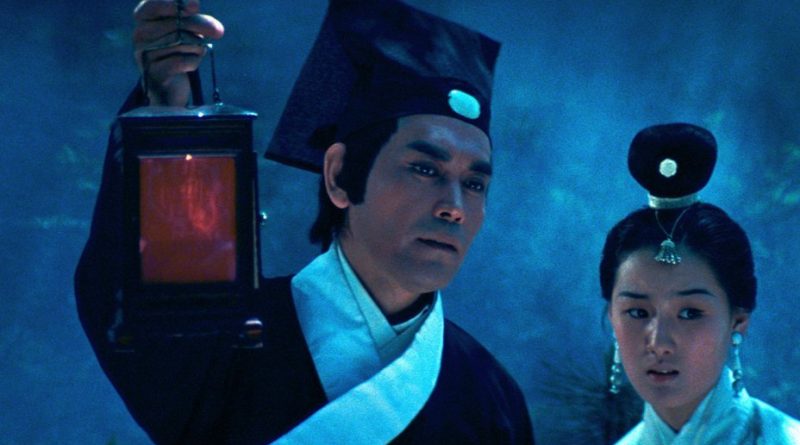 This wonderful supernatural fantasy is also a love song to the natural world and the traditional landscapes of Song Dynasty Chinese art.

Ho (Shih Juh) is a low-grade copier of texts in China, sometime in the early centuries of the second millennium. As the credits roll, he’s walking up to a monastery, where he agrees to do a piece of work, copying a long, sacred Buddhist text for the monks.

This particular sutra, Ho is told, has special powers: reciting it can lay unquiet spirits to rest. But in the hands of an unquiet spirit, the sutra will become a powerful force for evil.

Ho needs peace and quiet to get the job done, so he travels on foot to a distant, deserted fort, the site of a bloody siege some years before.

On the way, he keeps on glimpsing a mysterious, flute-playing woman who disappears whenever he draws near.

At the fort, he meets an old woman, her beautiful daughter, a raggedy retainer and the fort’s caretaker.

They eagerly offer Ho hospitality, but it’s obvious from the first moment that there are dark purposes behind their actions.

Ho is soon the hapless stooge stuck in the middle of a cosmic battle between good and evil. Will he get his writing done and make his deadline – or just end up dead?

King Hu is famous for his 1960s and 1970s reinventions of the ‘wuxia’ genre (a fiction and film genre which tells of the exploits of ancient Chinese martial arts warriors). In films like Dragon Inn and A Touch of Zen, he blends immaculate tracking shots with fast-edited action sequences to superb effect.

In Legend of the Mountain, using elements of slow cinema, slapstick and supernatural fantasy, he opens up a classic folk tale so that it becomes an epic demonstration of the way human life – the living and the dead – exists in nature.

First off, there’s all those walking sequences in which Ho, Ho and Melody (Hsu Feng) or Ho and Cloud (Sylvia Chang) traverse spectacular landscapes, interspersed with close ups of flora and fauna.

Even when the tracking shots capture the hard work involved in making your way across steep terrain, they are accompanied and associated with the curling wisps of mist that are in many shots. Often, Hu keeps the shot until first the figures have passed out of the frame, and then the curlicues of mist have dissipated in the air.

This is very notable in the extended drumming ‘sorcery’ sequences and the Buddhist monk’s attempts to counter the baleful influence of Melody. There’s also a striking percussive orchestral score that takes over where the narrative music leaves off.

The extended ritual sequences remind me of the 2016 Korean film The Wailing, which also had a materialist, even ethnographic approach to representing the supernatural. Here though, the materialist element is part of the realism of Hu’s approach: he shot the whole thing on real heritage locations in Korea and you can see and feel the substance of every building and room as well as the landscapes.

Apparently, Hu saw Buddhism as a cultural phenomenon rather than as a question of belief. He was primarily interested in the formal challenge of how ineffable experiences could be represented on film. He succeeds brilliantly here.

Eureka have been brilliant in releasing this immaculate restoration in the UK, as well as, previously, Hu’s Dragon Inn and A Touch of Zen.

Now, how about doing the same with the director’s breakout wuxia classic Come Drink With Me and Rain on the Mountain. The latter was made the same year as Legend of the Mountain and by the look of it on YouTube it contains some great set pieces, astonishing fast-edited sequences set around monastery buildings.

Legend of the Mountain is out in a special dual-format edition on 19 March 2018. 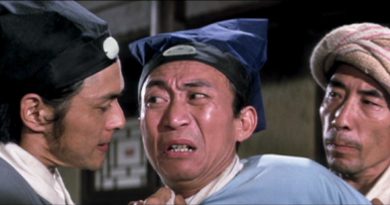