The title of this film in Danish is “Under sandet” meaning “Under the sand”, while the English title is a bleak pun on the subject matter, which is what director Zandvliet describes as the “never documented story of the dark side of Denmark’s war history”.

At the end of World War II German prisoners of war were forced to dig up and defuse with their bare hands the mines, which their compatriots had buried in the sand of the Danish beaches, when Denmark was under German occupation.  It was a terrifyingly dangerous task.

The (fictional) Sergeant Carl Rasmussen (Møller) is a Danish patriot full of anger against the German former invaders, as we see at the beginning of the film, when he brutally attacks a now helpless German pow.  So he is not averse to the task when his superior officer Jensen (Mikkel Boe Følsgaard) puts him in charge of a group of prisoners to dig up those mines from one of the beaches.  What Rasmussen is not prepared for though is that his charges are not men but teenage boys, some of them barely 16 or 17.  At first his hatred of Germans makes him really tough on them but gradually he begins to see them for what they are – young boys missing their homes and their mothers – and he starts to sympathise with them.  But will he be able to keep his promise that when their task is done, they will be allowed to go home?

The film is frequently a tough and often graphically violent watch.   At first the boys are starving.  The farmer’s widow Karin (Laura Bro), who is supposed to be feeding them, withholds their food, and when in desperation they are driven to stealing rat infested grain, which poisons them, Rasmussen feeds them himself, against the orders of his superior.  Several of the boys are blown up, one of them a twin, whose brother is devastated by the death of his sibling.  By the end of the film only four out of the original fourteen boys are left alive.

As Rasmussen starts to see the boys as human beings rather than the enemy, he develops an almost fatherly relationship with them, particularly their young officer Sebastian (Hoffmann).  Even the hostile Karin softens, when one of the boys risks his life to rescue her small daughter, who has wandered into the bomb zone.

The film’s implicit message about our common humanity with those we see as our enemies is a universal one – that the “eye for an eye” philosophy just doesn’t work.  The statistics we are given in the end titles make chilling reading.  Of the 7,000 German pows, who were forced to clear the mines, more than half died or were seriously injured – and many of those were, as in this story, just boys.

Extras include interviews with the director, producers and some of the actors. 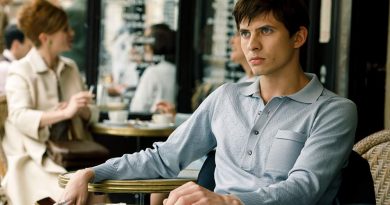