There is no shortage of films about love carrying on into the afterlife. On one end of the spectrum you’ve got films like ‘Ghost’, on the other is the likes of ‘Truly Madly Deeply’. From Japanese writer/director Kiyoshi Kirosawa comes the latest addition to the ghost romance genre: Journey to the Shore.

One evening piano teacher and widow Mizuki (Fukatsu) finds her late husband Yusuke (Asano) has arrived home. Not in an ethereal, walking through walls, can only be seen by her kind of way, more in a forgetting to take his shoes off, asking the conductor at the station when the next train is due kind of way. Yusuke announces that he has been on a long journey home and on the way has encountered some people that he needs to go back and help, and asks Mizuki to accompany him. What follows is a revisit to some of Yusuke’s old haunts (I cannot believe I stuck that pun in there) meeting people both living and dead, as well as digging up the skeletons (oh God the puns get worse!) of their marriage.

Journey to the Shore looks beautiful. The loving vistas of the Japanese countryside and small towns seems like the animations of Miazaki brought to life. The story is intriguing, but unfortunately never compelling. Yusuke comes across as smug and condescending rather than loving and altruistic, and Mizuki feels like a female character who is solely defined by her relationship with her husband. Neither are easy to empathise with.

There’s enough to keep one interested, but only just. Two stars fees like too harsh a verdict, so three seems fair especially for such accomplished direction and cinematography, but if you’ve got Ghost on DVD chances are that’ll be the one that gets re-watched the most.

Journey to the Shore is out now on DVD. 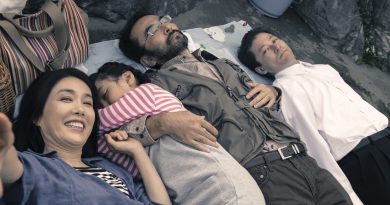