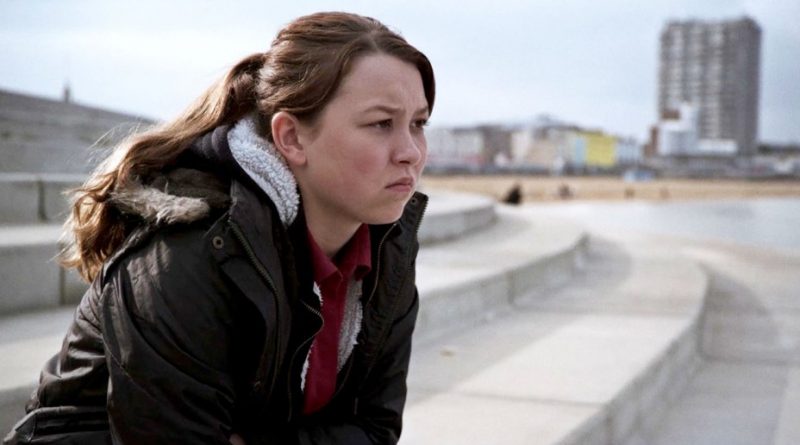 With its downbeat storyline this could well have turned out to be one of those worthy, depressing, miserabilist and rather boring low budget offerings so beloved by worthy British film makers.  But the good news is, it is not.

Quite the reverse. It’s entertaining, uplifting with a totally engaging central character and features exciting young talents on both sides of the camera whose future work I am already looking forward to.

A first feature film from young writer/director James Gardner, it is the story of 15 year old Sarah (Liv Hill), a ballsy, defiant and bitterly witty schoolgirl, who has little time for school.  With a mother (Sinead Matthews) who is bipolar and incapable of doing anything, let alone earn a living, Sarah is looking after her younger siblings, feeding them and the electricity meter with virtually no money, apart from what she gets doing a part time job in a local funfair, where she is bullied by her creepy boss Vince (Angus Barnett) and earns the odd tenner on the side giving hand jobs to old men.  Her drama teacher Adam (Cyril Nri) despairs of her lack of application – until he realizes that her sarcastic and cheeky demeanour makes her a natural to do a stand up comedy act in the school show he is preparing.  But will Sarah’s struggle for survival give her room to find her own voice?

Liv Hill was first seen as one of the abused Rochdale schoolgirls in television’s Three Girls and she made a big impression as the frightened housemaid in the sort of ghost story The Little Stranger last year.  Jellyfish confirms her as a very talented young actress.

James Gardner and his co-writer/producer Simon Lord are also talents to watch.  Filmed on location in Margate on a tiny budget, this film may be gritty social realism but, like another hard hitting movie of that ilk, Ken Loach’s I, Daniel Blake, it is also irresistible drama.  The adult actors give Hill good support, particularly Matthews as her hapless but self aware mother – and the story totally grips your attention throughout.