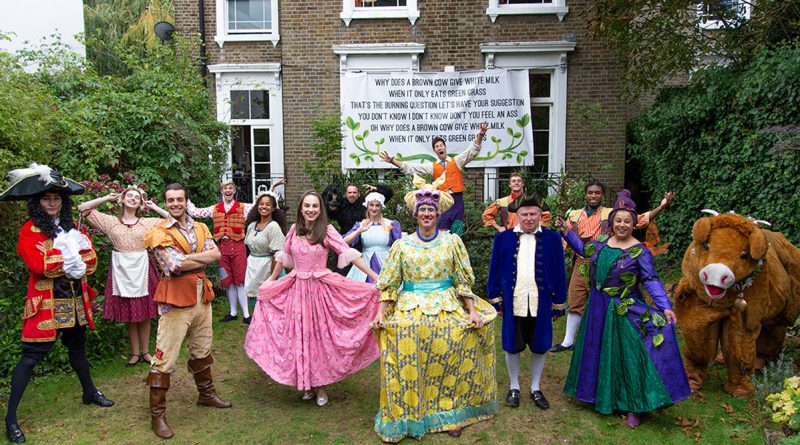 While theatres up and down the country have been struggling in the last couple of months to create socially distanced pantos for Christmas, back in lockdown summer actor/director and former Blue Peter action man Peter Duncan was wondering what he could do to save the 2020 panto season.  And he came up with a new genre – Online Panto, to be shot in his own back garden and that of one of the neighbours.  Once he got word around to his actor mates, the project grew from an initial guerrilla style idea to a full blown film but using the true panto tradition.

The result is an endearing, rather “fit up company on the hoof” effect, though the costumes are really quite flash.  Duncan himself plays Dame Trott as well as writing and co-directing with Ian Talbot, who plays the grumpy Squire.  There’s an endearing Buttercup the cow; two villains – the Giant (Yuval Shwartsman) and his Fleshcreepy gofer (Jos Vantyler).  Jack Trott, who brings home the beans in exchange for poor Buttercup, breaks principal boy tradition by being played by a fellow (Sam Ebenezer).   His love interest though is still a girl (Sarah Mossand) and there’s also a verse spouting fairy (Nicola Blackman).  Plus some of Duncan’s South London neighbours joining in as the chorus of villagers.

All the groanworthy jokes, puns and slapstick business are there; the songs and dances, including the traditional sing along one with the audience and the cast also courageously invite their invisible audience to do the usual responses – “Oh yes they do.   Oh no they don’t.  He’s behind you” and so on.  There are also the usual topical references – this time to the environment and save the planet.   And thank goodness we had a good summer because the main location – Duncan’s back garden – is central to the whole enterprise and very well used.  Nice garden too though I noticed the lawn was looking a little trampled by the end.

Whether seen in the cinema or online, this is not only an enterprising effort demonstrating the ingenuity of actors refusing to be beaten by some mouldy old virus (Boo!)  but also fun entertainment for both a three household family Christmas do or an online community virtual gathering.  (Altogether now – Hooray!)