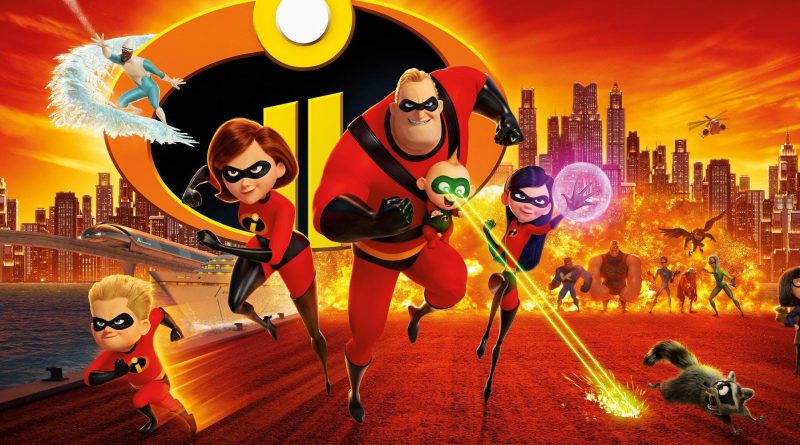 There have been countless superhero movies having made their way onto out screens in recent years from Iron Man, Thor and Captain America to Superman, Batman and Wonder Woman. There is one original animated superhero family however that returns this year after a break of more than a decade – and yet no one looks any older!

This time around, within Pixar’s The Incredibles 2, it is woman power that takes the spotlight with Helen (Hunter) as Elastigirl seeking to save the reputation of Superhero’s all over the world. The father of the family Bob (Nelson) is left at home holding the baby (literally) with his daughter Violet (Vowell) and son Dash (Milner).

While this new family dynamic is a strange transition for all involved, the additional stress of Jack-Jack’s emerging powers tops it off. The development of Jack-Jack’s powers can be quite comical in some situations. For instance, when he turns into a monster, sets himself on fire, duplicates or transports through dimensions. Although this can be quite disastrous and worrying for the family it makes for some great viewing. Add to this family some teen anguish for poor young Violet when a boy at school she has an interest in has his minded wiped after finding out her true identity and you can imagine the bad temperedness when she finds out what has happened.

There is quite a significance put on being who you are and being true to yourself within this family. This is especially notable when Helen meets other Superheroes that are being shunned away due to their powers. She reunites with her family and those around her that share similar strengths to fight the evil that has come upon them.

One of the unnerving aspects is the sincerity that comes across as the evil “Screenslaver” talks about how the rise in technology (internet/television) has made humans rather reserved. There are moments where humans would rather watch others take risks rather than do it themselves; watch holiday shows rather than go on vacations; watch game shows and not take chances in life and watch talk shows rather than have a face to face conversation. People would rather use technology and live life through these means than break a sweat, participate in life and make meaningful experiences.

With great characters, an engaging plot and themes that really get you thinking, The Incredibles 2 will in no doubt become a family favourite just likes its predecessor.

There is also a short film called Boa on the special features about a woman who imagines a life with a dumpling child as a way to cope with her own child leaving home and finding his way in life.