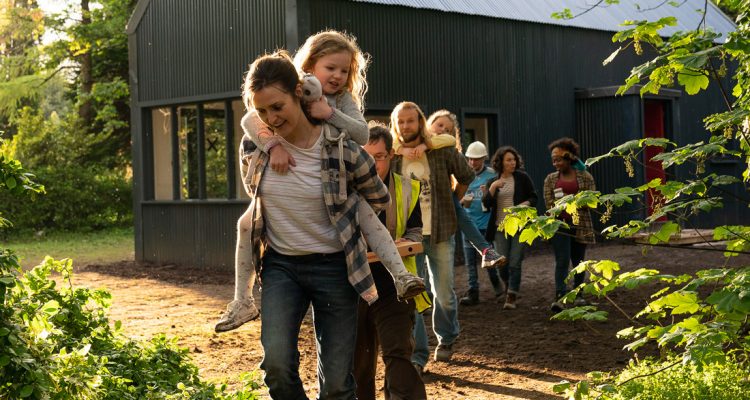 At the very beginning of the film we see Sandra (Clare Dunne) being beaten up by her partner Gary (Ian Lloyd Anderson) while her little girl is running for help, carrying a note from her mother outlining her plight.  It is appropriately shocking in its violence and colours the whole of the film.  Sandra’s fear of Gary, even in other scenes when he’s being nice, is shared by us and the film really brings home to us the inescapable horror of domestic abuse.

Dunne, who also wrote the film, was moved to do so when a friend of hers was made homeless after escaping from an abusive partner.  The enterprising character she has created here however takes an unusual and self determining route.  She can’t afford to buy or rent a house for herself and her children but her wealthy and supportive employer and friend Peggy (Harriet Walter) gives her a plot of land and with the help of other friends she makes along the way, Sandra designs and builds her own house.  Which sounds like the stuff of fairy tales and indeed in the film Sandra gets the idea from one of her daughter’s bedtime stories.  The film’s makers however assure us that the self build project is based on fact.  The speed with which the amateur builders who help her develop their skills, even under the experienced supervision of her builder friend Aldo (Conleth Hill), stretches belief a bit but this tale of female enterprise certainly provides a good motor for the plot.

That is not the end of Sandra’s troubles however.   When Gary fights Sandra for custody of the children, as he manipulates the facts to make her look like an unfit mother, it looks like the case is going against her.  And although at one point we seem to be heading towards a triumphant, feminist, feel good ending, stand by for another twist to the story.

The film is directed by Phyllida Lloyd, who has worked with Dunne in the theatre, including on her all female production of Julius Caesar and though somewhat smaller in scale than Lloyd’s previous films Mama Mia and The Iron Lady, it packs a hefty emotional punch.   Dunne brings great conviction to the leading role and there is good support from Walter, Hill and Lloyd Anderson plus Molly McCann and Ruby Rose O’Hara as Sandra’s daughters