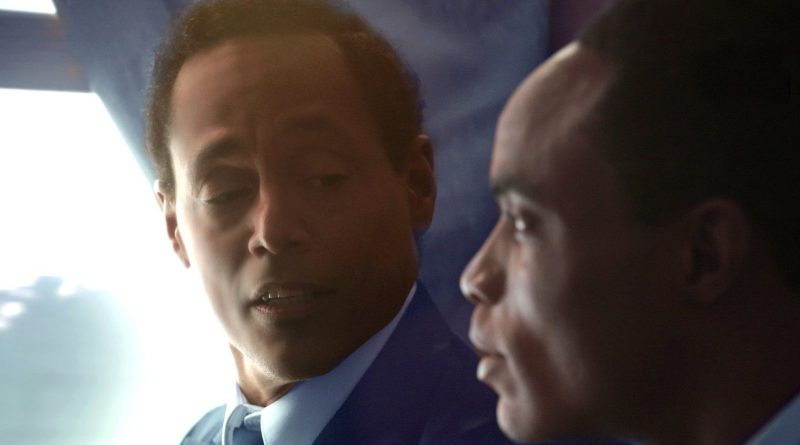 Have you heard of Ulric Cross? No! I should think that goes for very many of us in the UK. But by the end of this film, you will not only know quite a lot about his life but actually wish to research more.

Directed by Frances-Anne Solomon, who is also credited as the writer and producer, Ulric Cross’s daughter is the link between Ulric’s past and his final time alive. He died aged 96 in 2013. We learn the story of Cross.

He was born in Port of Spain, Trinidad in 1917 and although highly qualified could find no suitable employment. He came to Britain in 1941. Not given a high posting after enlisting, Cross managed to become a navigator and at the end of WW2 was the RAF’s most decorated West Indian airman.

However, Ulric Cross couldn’t find a job in the legal profession for which he was qualified in the UK and so worked for the BBC, producing talks for its Caribbean radio service. In this capacity he got to know C.L.R. James (played in the film by Joseph Marcell) and George Padmore (Fraser James) who were working to make Africa independent.

While Padmore helped President Nkrumah (Jimmy Akingbola) gain power, Cross joined his new administration. Cross put a lot of his energy – moving from Ghana to Cameroon and then Tanzania – to form a coherent nation. He believed in a United States of Africa.

The film is both a narrative and acted out scenes from Ulric Cross’s life. It also shows us something of the times in which Cross lived.

An inspirational freedom fighter, Cross was helped by his English wife Ann (Pippa Nixon plays the young Ann Cross) who we see and hear as she talks of her life with her brave husband). Jessica Hill plays Ulric’s daughter Nichola, while Nickolai Salcedo is a charismatic Ulric Cross. The actor blends in well with pictures of the real Ulric. We can believe in his idealism and frustration when he has to struggle with political powers to get his views taken on board.

So, we learn about Ulric Cross the man, the legal brain, the politician, the loving husband and father and how he became a hero to his people.