Dir. Alexander Hall, US, 1941, 94 mins
Cast: Robert Montgomery, Evelyn Keyes, Claude Rains, James Gleason
Nestling in a unique space somewhere between Harvey and It’s a Wonderful Life, Here Comes Mr. Jordan tells the fascinating tale of a boxer, Joe Pendleton (Robert Montgomery), who is taken to the afterlife following a near-fatal plane crash whilst flying solo on his way to fight for the title. When it transpires that an angel in training has made a mistake, and Joe was not due to die for another fifty years, he is taken back to earth only to discover that his body has since been cremated.

Enter the mysterious Mr. Jordan (Claude Rains) who gives Joe the opportunity to pick a new body to inhabit from hundreds of soon to be deceased suitors, but will he find one which is athletic enough to fulfil his lifelong ambition of winning the title? What unfolds next is a brilliant screwball comedy with a supernatural edge as Joe hops between various bodies and falls for a girl who might just interfere with his hopes of continuing as a boxer.

The exposition is handled adroitly – Joe asks Mr. Jordan all of the questions that might enter your mind about his starling predicament – and feels like a natural progression to the storyline. Much of the hilarity stems from the fact that only Joe is able to see Mr. Jordan and their madcap antics are increased twofold when Joe’s former boxing trainer Max Corkle (James Gleason) enters the picture and is finally convinced that the man he sees before him is the reincarnation of Joe.

Whilst Here Comes Mr. Jordan comes across as a quaint curio in places it still entertains throughout, thanks in part to the superb cast who run with the idea for all it is worth. Evelyn Keyes is suitably doe-eyed as Joe’s love interest and Edward Everett Horton is excellent as the flustered messenger whose decision to take Joe before his time caused the whole mess.

Scenes showing the afterlife are beautifully directed by Alexander Hall as he shows Joe and other souls who have recently passed being accompanied across clouds to their next destination. This may well have influenced Powell & Pressburger for their journey to the afterlife, A Matter of Life and Death, with the angelic appearance of Mr. Jordan and the vast expanse of the open skies that act as a stunning backdrop evoking the future classic, amongst many other films that would later visit the celestial world.

Here Comes Mr. Jordan received a staggering seven Oscar nominations in 1942 and took home two awards for the best writing and screenplay, which is unsurprising when you consider how razor-sharp the script remains even 70 years after its inception. There are a number of unexpected turns which propel the story into a crazy yet satisfactory denouement and it is no surprise that a sequel and two remakes have followed over the years.

As is always the case with the Criterion Collection the lavish disc is brimming with extra features and insightful discussions about the film. Of particular interest was the conversation between critic Michael Sragow and independent filmmaker Michael Schlesinger which divulged the different facets of the film that resonated most with Sragow’s family members. He hints that as a young boy the story actually used to scare him, and it is easy to forget whilst watching such a delightful screwball comedy that the story is actually grounded in a morbid concept, and tackles a breadth of subject matter with relative ease.

Those with a penchant for screwball comedies or supernatural fables will delight in this well-crafted restoration and people new to the world of Here Comes Mr. Jordan may just discover a new favourite, and would do well to seek out this classic available now on Blu-Ray for the first time.

Here Comes Mr. Jordan is out on home entertainment on 20 June 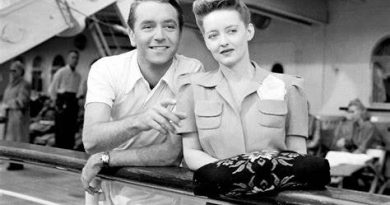