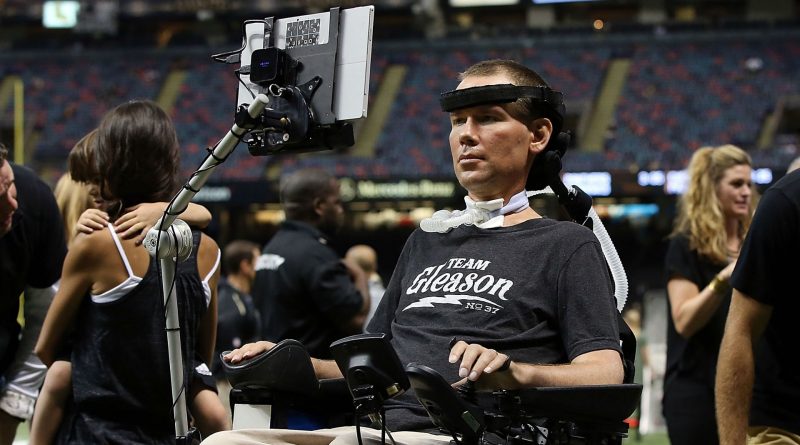 When Stephen Gleason, former American football star is diagnosed with ALS/ Motor Neurone Disease at the age of 34, it is not the end for him but the start of a remarkable story.

It is a very sad tale to watch, but seeing how Steve copes not just with his illness but using it to tell his still unborn child about life and later starting a charity to help other sufferers is truly remarkable.

The documentary about Steve and his terminal illness is directed by Clay Tweel who manages careful editing to put across the bravery not only of Steve himself but also the huge input of his wife Michel, who has stood beside her husband and been his main helper from the beginning of his illness to the present day. Six weeks after Steve received his terrible news, the couple found out that Michel was pregnant. Once Steve was told about how he would deteriorate, he decided to make a series of videos chronicling his experiences. He did this as a diary and also as a record for his son Rivers. The documentary was filmed over a five year period.

The very unusual point about this film, and how it differs from other documentaries about severe illnesses, is that this one shows the very difficult times as well as the happy or emotional ones. So we see Steve talking about how he soils himself after the stem surgery he has leaves him unable to control his bowels. We see Steve deteriorating as he faces increasing difficulty in walking, talking and eating. He has to use a wheelchair. Eventually Steve can only communicate by learning to type with his eyes . He has a good relationship with his son and with the help of his wife and carers is able to do activities with Rivers

One of the most astonishing parts involves Steve’s conversations with his father, Mike. It is obvious that Steve and his dad have had a somewhat fractious relationship and that has continued into Steve’s decline. Mike believes that if his son truly turns to God then his health will improve. Mike even takes Steve to a faith healer but that doesn’t do any good. Later the two talk more frankly and by the time Steve is very ill his father is able to apologise and the two come together in a better relationship.

In the midst of all their enormous personal problems, Steve and Michel set up Team Gleason, a charitable Foundation to help others with ALS/motor neurone disease. At times we see Michel really struggling to cope but she carries on looking after her small son and her husband.

I was weeping as I watched. It is about Steve and his disease but also looks at his relationship with his son and with his wife. Michel is a very special woman who has obviously made a huge contribution to Steve being able to run his Charity and also interact with his son. I greatly admire Michel as well as, of course, Steve Gleason, Approaching 40, he is still pursuing life in the best way he can. I urge you to see this ultimately uplifting documentary.