Charles Vidor’s enthralling film-noir Gilda, featuring a career-defining performance from Rita Hayworth at the heart of a tempestuous love triangle, has finally been released on Blu-Ray for the first time in the UK.

As a star-studded tribute to Rita Hayworth’s undeniable talent, Gilda is second to none, and you will be hard pushed to find a more captivating film-noir, even if the characters take centre stage over an occasionally disjointed storyline.

The unforgettable moment when Rita Hayworth makes her entrance will forever be etched upon my memory – as it must too be firmly lodged in the minds of any audience who witness such a dazzling and provocative introduction to a femme fatale.

Accentuating Hayworth’s bravura performance are George Macready as the powerful casino owner, Ballin Mundson, and Glenn Ford as his employee and right-hand man Johnny Farrell. Their bond of friendship is tested to the limit by Gilda who flaunts her charm and sexuality with any rich man who comes her way, in a turn that will inevitably delight and amuse viewers from all generations.

Gripping from the word go, the opening scene of Gilda is set in a shady bar where we get a glimpse of Johnny Farrell’s conniving yet charismatic nature as he tricks his way into winning a game of dice against a group of sailors.

This gets him into a tight corner until Ballin intervenes, forming the basis of their friendship which eventually develops into a trusted work partnership, as Johnny takes charge and works his way to the forefront of the casino business.

Vidor makes excellent use of lighting and shadow play to invoke a sense of mystery and an air of menace that permeates his smoky saloons and the bustling casino. This comes into its own when Vidor restricts the character’s appearances to mere silhouettes, creating bold and striking imagery that adds both clarity and style to important scenes. Many of these are just as effective as Hayworth’s iconic entrance, with a last minute dash to a getaway plane and a haunting vision of Ballin smoking a cigarette standing out as superb shots that elevate Gilda above the pulp origins of its storyline.

Key to the success of any film noir are the narrator’s internal monologues, and Glenn Ford delivers his lines like he has experienced every moment of Johnny’s exciting (and often dangerous) life, as he recounts and sensationalises his compelling story for the audience. His relationship with Gilda is the root of many problems; their past remains shrouded in mystery, but their future is just as uncertain and, as Johnny wrestles with the notion of betraying Ballin, we are never quite sure which choice he will make.

Whilst Gilda might not reach the dizzying heights of classic film noirs such as Double Indemnity or The Maltese Falcon, the outstanding performances from its three leads make this an essential addition to any film fan’s Blu-Ray collection. The additional features include an insightful interview with Martin Scorsese and Baz Luhrmann who wax lyrical on Gilda‘s legacy and its lasting appeal, alongside an audio commentary by film critic Richard Schickel, and a fascinating essay that is sure to satisfy any film noir enthusiast. 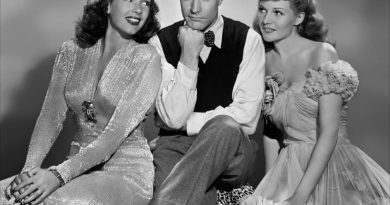