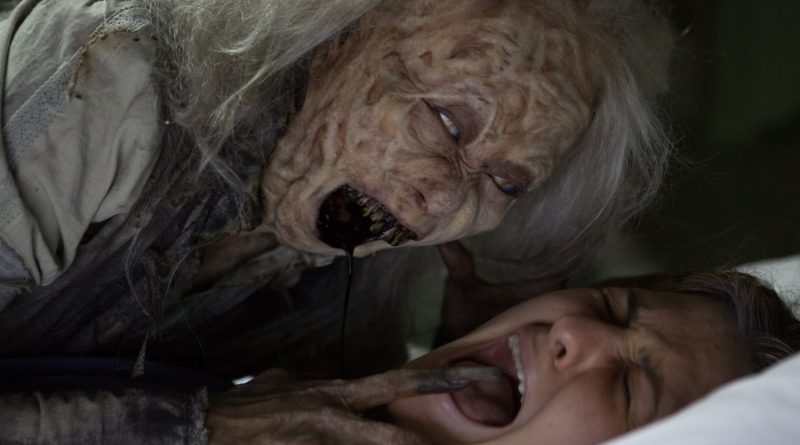 Ghost House is one of those movies that you go into not really knowing what to expect and whether it will have the desired effect to be classed as a decent horror movie.

Within the first few minutes of watching, that thought goes straight out of the window and the goosebumps start spreading up your arms. From the opening sequence on the streets of Bannock, a woman is seen running and screaming for her life, as a black mass comes out of ground and forms the dark shape of an elderly woman and attacks; this was enough to intrigue.

The story then introduces Julie (Taylor-Compton) and Jim (Hebert) who are in Thailand on vacation. As they explore the city with their guide Gogo, Julie becomes fascinated with the Ghost Houses, a place where spirits will stay if they receive offerings from the locals. They are approached by two British gentlemen who take them on a trip to the countryside to see the ghost house graveyard, an area where the old houses are placed as people are too scared to throw them away. These gentlemen have other plans however, and leave them in the Graveyard and Julie becomes attached to a malevolent spirit.

The remainder of the film sees Julie fighting for her life and soul as this spirit wants to take her soul to the ghost world. When a monk and hospitalization cause no improvements for poor Julie, Jim and his guide Gogo enlists the help of a Witchdoctor to exorcise the spirit back to the Ghost House in which it came from.

We have seen Scout Taylor-Compton in various horror movies in recent years, including the two Halloween remakes so when it comes to appearing terrified and being able to give a good scream she has had plenty of practice. She is supported in her role by James Landry Hebert, the boyfriend who tries everything he can to protect his new bride to be from harm, seen or unseen.

There are more than enough moments to make you jump from your seat and send shivers and goosebumps throughout your body. It will have you glued to the screens with its dark and mysterious visions and nightmarish attacks. The ways in which the long shots and zoom ins are used make things even more hypnotizing. There are some aspects that may have you draw some correlations with The Grudge but this one is able to stand on its own as being a truly terrifying experience.

The film flips perspectives at times from the normal world to Julie’s perception of what is going on around her through visions and this really adds another layer to the frightening tale as you hear subtle breathing, small whispers and scampering as well as see snippets of the spirit that is haunting Julie. The music also adds a lot to the suspension created and overall emotive feel of the film and the way in which it is received.

Ghost House is not your typical horror flick with blood, slayings and murders. It takes a belief that is very real to some cultures, that of the Ghost House and spins a paranormal aspect within it to create a spin tingling tale and worthwhile viewing for anyone who likes a few scares.

Ghost House is available on digital download 28th May 2018