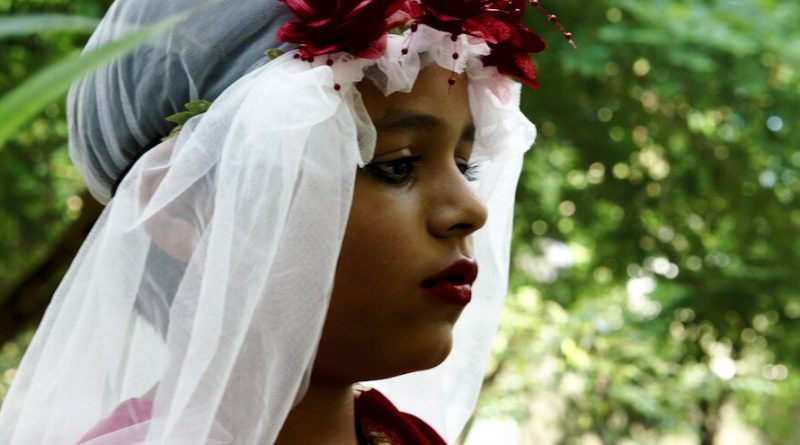 As she did in her 1998 film which was set against the bloody conflicts of the 1947 borderlines conflict between India and Pakistan, Canadian/Indian director Deepa Mehta once more looks at personal relationships against the background of civil war.

Based on the novel by Shyam Selvadurai, who co-wrote the screenplay with Mehta, the war is the 25 year long civil war in Sri Lanka between the Sinhalese majority and the Tamil minority.  It is the story of Arjie, son of a wealthy Tamil family, who is gay in a country where that is against the law.

In the leisurely first half of the film set in 1974 the coming conflict between the two factions just rears its head occasionally.   Arjie is a small boy, played by Arush Nand whom we first meet playing a dressing up game of weddings in which he is the bride.  His family are shocked to see him all dolled up in lipstick and red sari.  “You’ve got a funny one there”, says one of them.  Oddly no-one seems concerned that the groom is played by a little girl.

Arjie’s father Appa (Ali Kazmi) is concerned though about his son’s “girly” ways and tries to steer him firmly in the direction of manly pursuits such as cricket.  Fortunately though Arjie’s cool auntie Radha (Agam Darshi) has just returned from college in Canada and she encourages him to be himself, taking him to her drama group, where they are rehearsing “The King and I” and secretly painting his toe nails.  She too though is subject to the repressive cultural norm, when she is forced to give up the Sinhalese man she loves and marry a Tamil man chosen by the family.  Like Arjie, we miss her when she’s gone

The story then moves to the early eighties and closer to the upcoming civil war.  Arjie, now a teenager and played by Brandon Ingram falls in love with his charismatic school friend Shehan (Rehan Mudannayake).  A distant relative, who is a member of the militant Tamil Tigers, is given shelter by Appa.  And the conflict moves closer to the family, as the protection provided by their wealth crumbles.

Considering its subject matter this film has a lot of charm.  Arjie is a delightful child and the love affair between teenage Arjie and Shehan, who is an avid Bowie fan and lives conveniently alone in the crumbling mansion left to him by his father, is largely one of exuberant joy.  There is also the lushness and beauty of the country itself, which we are aware of from the opening scenes of the children running through the forest and then along the beach.  So despite the hints we’ve had, the final scenes, where the family are forced to hide from the howling Sinhalese mob, are a shocking contrast to what has gone before.

The various strands of the story do not always merge totally into a coherent and flowing narrative.  And there has been criticism of the film for not casting native Tamil speakers – not something of course that Western audiences will be conscious of.  The film does though illuminate an important piece of twentieth century history and makes the oft stated but important point thought its characters and their story about the evils of imposing repression, be it on a personal level or involving ideology, race or religion.

FUNNY BOY, Canada’s official entry for the 93rd Academy Awards in the Best International Feature Film category, is available in the UK and Ireland from  December 10, distributed by filmmaker Ava DuVernay’s multi-platform arts and social impact collective ARRAY, and is available to stream via Netflix.