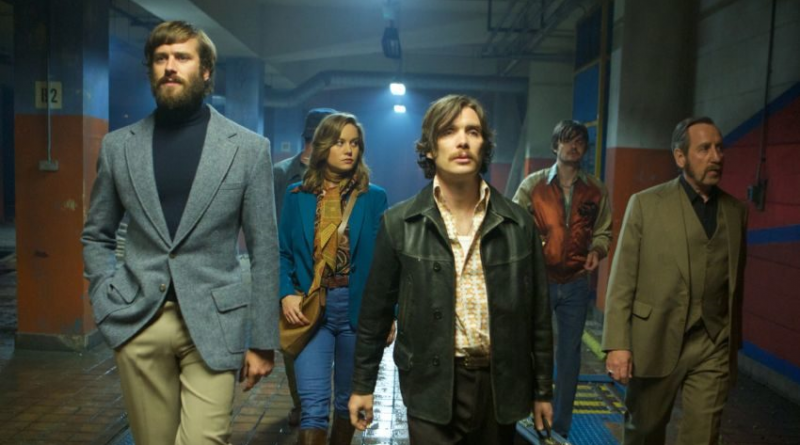 A warehouse full of armed criminals, a gun deal involving the wrong goods and some personal grudges. What could possibly go wrong?

Free Fire reduces its amateurish would-be cowboys to crawling around in the dirt taking cover, receiving multiple flesh wounds and struggling simply to the leave the building alive. It doesn’t sound like a slick comedy but it certainly sounds farcical. Brilliant farce it is too as Wheatley seeks to debunk movie conventions of gunfights. Everyone has a gun, but there is no-one is particularly good at using it.

Justine (Larson) is a fixer who sets up a meeting between Chris (Murphy) who wants some guns and Vernon (Copley) who is selling guns. There are lots of guns. The more references to the guns, the more they lose their meaning. It’s not a film about guns it’s about the people that get trapped as a result of the gun deal. These aren’t even the guns used in the gunfight. It’s a fight with guns over guns. There are lots of guns. No sleek Bond-like impossible shots with high-end equipment, but basic guns with basic humans attached to them.

Inevitably the planned deal goes south. The Irish duo Chris (Murphy) and Frank (Michael Smiley) – along with their runtish grunts Bernie (Enzo Clienti) and Stevo (Sam Riley) – are pitted against Vernon (Copley), his colleagues Ord (Hammer) and Martin (Cessay) – and their ‘muscle’, Gordon (Noah Tyler) and Harry (Jack Reynor). Justine (Larson) is caught in the crossfire as the third party. Got it? When Gordon shouts “I forgot whose side I’m on” it’s hardly surprising in the mayhem.

As the promotional material shows, every character is important. Even the menial hired help are a key part of the action and indeed it is a squabble between Stevo and Harry that turns the business transaction into a warzone. In a 90-minute concept film this is vital. Any padding characters would instantly weigh down the idea and lengthen the film. Wheatley does a largely superb job of holding interest in a story with so little plot. Much of this praise should be shared with his wife and co-writer Amy Jump who rewrote as they shot and worked hard to mould the characterisation around the specific actors they had chosen. There are two sources of the comedy. As a farce there’s the physical stuff, stray bullets, the writhing on the ground and limping around, but as a drama it is the dialogue that sparkles as bright as Ord’s perfect teeth.

Sharlto Copley so completely embraces ‘Vern’ in all his obnoxious extravagance that virtually every line is a gem. “Watch and Vern” could become a cult catchphrase worthy of the equally ridiculous Ron Burgundy. He catches the eye most with his garish 70’s open-necked shirt and horrible suit and his self-delusion. Most of his interplay is with Armie Hammer, the well-groomed, sharp and confident American. Hammer is so cool and very funny.

Cillian Murphy is typically at ease while Brie Larson, who unfortunately has found herself stuck in a room again, is refreshingly badass; a sneak preview of her future Marvel appearances as Carol Danvers perhaps.

For all the fun though, the film works more as a string of these small pieces of brilliance – the trailer, at two and half minutes (that’s an eighteenth of the entire feature) contains most of these – with the result that it does drag in sections. A victim of its own success because it is so good, Free Fire shoots itself in the foot where perhaps a little more narrative would create the differing situations with which to continue the exciting pace it is capable of. 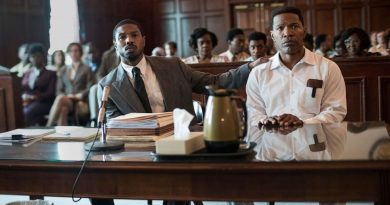