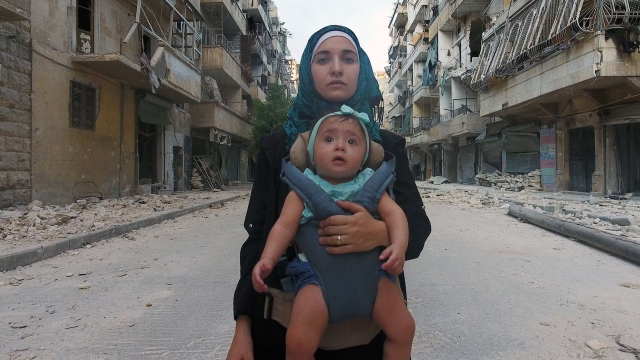 As bombs fall around the hospital where she is working, Waad al-Kayeaab grabs her daughter and hands her to someone else as she moves to a safer place during yet another bombing in Aleppo, Syria. When she gets to the safe spot, she cries out, “Where’s my girl? Who’s got my girl?” Luckily, she finds her.

In For Sama, Waad narrates the political and her personal story over 8 years of fighting in Aleppo. This is a love letter to her daughter, Sama, who is born while Waad is working in the hospital, alongside her colleague, Dr Hamza who she later marries. In spite of the dangers and many, including very young children, being injured and killed,Waad and her husband choose to stay in East Aleppo while buildings and Aleppo itself is being destroyed.

There are a lot of very harrowing scenes, but we can only admire Waad’s determination to keep filming so that people far away will see and understand what is happening as those living in Aleppo remain under siege. Some scenes of the bloodied bodies of injured victims and of children dying are almost too terrible to watch. Almost as awful is seeing children playing in the bombed sites and even on a bus which has been blown up. The only life they know is one of terror and destruction.