The critical and more crucially financial success of “The Best Exotic Marigold Hotel” demonstrated that there is gold in them there “old ‘uns” or to put it more politely, older audiences are worth courting.  “Finding Your Feet” appears to be another effort to chase the “grey pound”.

Featuring a sterling cast from the more mature end of the acting spectrum, the story kicks off when Sandra (Imelda Staunton) discovers that her just retired, wealthy and recently knighted husband (John Sessions) has been conducting an affair for years with her best friend Pamela (Josie Lawrence).  With her dreams of comfortable, marital golden years shattered, Sandra takes refuges with her elder sister Bif (Celia Imrie), a cheerful, unmarried ageing hippy who lives in a council flat.

As the sisters haven’t seen each other for years and Sandra is a bit of a snob, the going is at first rough.  But when Bif persuades her sibling to join her at the local dance class, Sandra is drawn into a promising looking romance with Charlie (Timothy Spall), a furniture restorer, who lives on a humble canal barge.  Also in the class is Joanna Lumley, who despite having her normally blond hair dyed grey is still age defyingly gorgeous and snaffles one of the best gags in the film.

From the trailers you might be led to believe this is a bit of a musical extravaganza along the lines of “Stepping Out” but the dance class is only one element in a story which mixes comedy with tragedy and an inevitably bumpy late life romance.  It gets off to a slightly uneasy start, where it looks like we might be in for an elongated sitcom with Staunton making like to the manor born, but once we get into Bif’s world and particularly the relationship between the sisters, the film settles into a likeable if not always totally believable attempt to convince us that there is life and indeed love in later life.

The dance element is fun, as the older hoofers put on a street show in aid of Age Concern, the success of which wins them an invitation to perform in Rome, where they perform an unlikely full scale song and dance number in which Sandra joins in at the last moment.  I know Staunton is now a veteran of the musical stage but really?

However she and Spall make a convincing pair of late life lovers, dragging their pasts behind them and Imrie is both funny and touching as Bif, hiding the tragedies of her life behind a fiercely independent and easy going exterior. 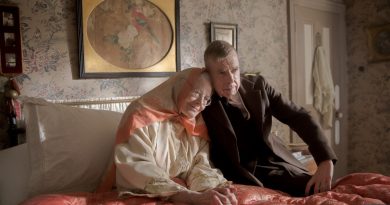 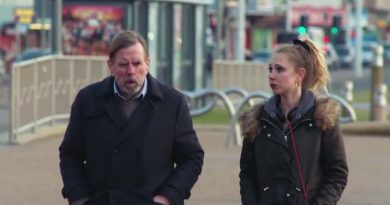