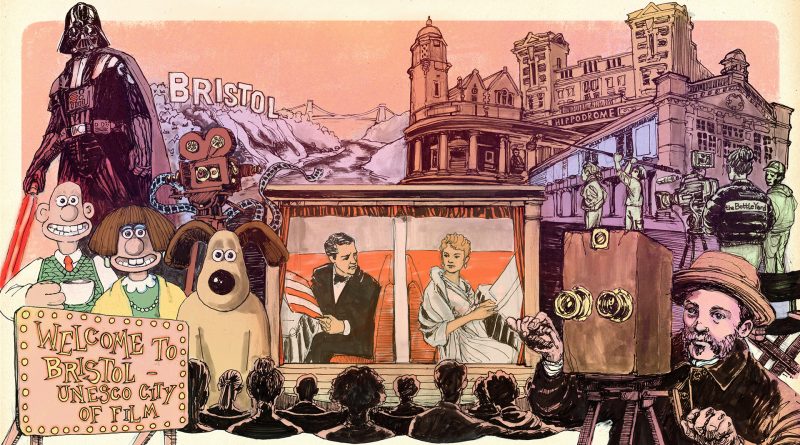 BRISTOL: Film 2021, a new year-long programme of activity celebrating the many aspects of Bristol’s film and moving image credentials is being launched today (18 March) by Bristol Ideas and Bristol City of Film, supported by the city’s film studios, cinemas, filmmakers and festivals.

Marking the centenary of the death of Bristolian inventor William Friese-Greene (1855-1921), a pioneer of early motion pictures, Film 2021 will include film screenings across the city, walking tours exploring cinema buildings, photography exhibitions, talks and panel discussions, and the launch of a special publication recounting the public’s memories of cinema-going throughout the past 70 years.

Andrew Kelly, Director of Bristol Ideas, says: “For a long time, William Friese-Greene’s contribution to film had been dismissed. The centenary of his death is the perfect time to reassess his achievements as scholarship has revealed new material and Friese-Greene is now increasingly recognised as one of the pioneers of British cinema and a major figure in the early development of moving pictures. He was a fascinating individual who came from a working-class background into prominence in the world of science and he used that fame to promote the role of women in the field of photography, for example.”

Film 2021 is co-delivered by Bristol City of Film, the permanent UNESCO status that recognises Bristol as a world leader in the field of film and the moving image. “What better way to mark the achievements of Bristol’s film and moving image sector today than by shining the spotlight on a pioneer of the past who devised ground-breaking developments in motion picture technology,” says Bristol City of Film’s Natalie Moore. “The ripplesof Friese-Green’s work were felt by the film industry in the UK and across the globe. With projects like the CAMERA Innovation Motion Capture Studio at The Bottle Yard now opening up possibilities of mo-cap technology to businesses, Bristol continues to break new ground today.”

Laura Aviles, Senior Bristol Film Manager responsible for The Bottle Yard Studios and Bristol Film Office says: “It’s heartening to see such strong levels of production in Bristol in the first quarter of 2021 after the challenges of 2020. Bristol Film Office is supporting multiple productions whilst Studio bookings are looking healthy well into 2022.  We’re on track for realising The Bottle Yard Studios’ expansion plans, with a full business case now in development and £11.8m investment committed by the West of England Combined Authority to increase capacity from eight to 11 stages. This is great news considering that TV and film production is going to play a crucial role in driving employment and inward investment, as Bristol recovers from the effects of the pandemic.”

The pandemic has, however, had a longer lasting impact on the city’s exhibition and festival sector, with cinemas still temporarily closed and film festivals forced to either move activity online, postpone or in some cases, cancel. Many working within the creative industries, particularly freelancers, have faced the loss of work and little or no state support. Film 2021 hopes to welcome the safe return of audiences to cinemas and festivals, and to celebrate the skills and innovation of the region’s film professionals.

“Bristol is a great film city with a rich history in cinema and vibrant innovative future with the moving image,” says Mark Cosgrove, Watershed’s Cinema Curator and Founder of Cinema Rediscovered. “I’m looking forward to being able to welcome audiences back into Watershed and working with partners to bring new films and filmmaking talent from around the world to the city and explore the many strands of film culture through festivals like Cinema Rediscovered, Afrika Eye and Encounters.”

Film2021 will also welcome visitors from outside the city. “The role of film heritage and film tourism are critical to the work of Destination Bristol.  By celebrating this and developing new content to engage and inspire, Film 2021 will highlight the innovative work of Friese-Greene, the impact and legacy today,” says Kathryn Davies, Head of Tourism, Destination Bristol.