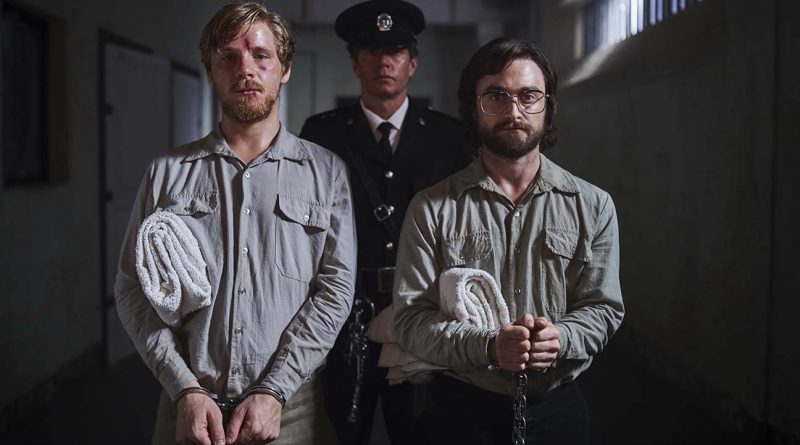 On DVD or streaming now

What a pity the film has this title – it rather gives the game away! However, this thriller is based on the real-life escape in 1979 of Tim Jenkin (played here by Daniel Radcliffe) and Stephen Lee (Daniel Webber) after they were imprisoned in Pretoria Maximum Security Prison.

The two young white ANC (African National Congress) activists set off explosives on the streets of Johannesburg in 1978 as they distributed anti-apartheid leaflets. When arrested, they are taken to court and convicted. Tim is sentenced to 12 years and Stephen to eight years. They are sent to the whites-only Pretoria prison, which was known as the white man’s ‘Robben Island.’

Meeting up with Denis Goldberg (Ian Hart) and Leonard Fontaine (Mark Leonard Winter), ANC political prisoners, they plot an escape bid. Tim, who has been put to work in the prison workshop makes wooden replica keys, based on those he sees hanging on the belts of the guards. Gradually over 20 months he makes enough keys needed to fit all 15 locks. Joined by Leonard, Tim and Stephen make preparations to escape.

The film is not really a thriller on the lines of will they or won’t they escape. Rather, the movie shows how they manage the escape. As such it remains exciting and the audience is caught up in the careful manner in which the escape is planned as well as its execution. And director Francis Annan manages the tension and gradual build-up of the story really well.

Ian Hart puts in a good performance as a long-term prisoner who tries to prevent the escape as he believes it will never succeed. The real Tim Jenkin appears as an extra in a scene in the prison waiting-room. Daniel Radcliffe once again shows that he has now grown into a fully fledged adult actor. He gives a well-rounded portrayal of the main character.

The film is based on Tim Jenkin’s book. Well-acted, carefully edited and directed with real care for the story and its interpretation, it is worth a watch!