It’s always a special treat to sit down to a sci-fi adventure from my younger years that I missed seeing at the time and have somehow missed ever since.

In this one Dennis Quaid plays a space fighter pilot in a time when a united Earth is expanding into the universe and is at war with the Drac, a race of lizard-like aliens. (The year is 2090, for what it’s worth.)

Quaid is shot down in combat and crash-lands on a brutally inhospitable planet, where he encounters Jeriba, the Drac pilot who shot him down and whose ship has also crashed. Initially mortal enemies, they find that they have to get along to survive, and become close friends.

It plays out very much like an episode of one the later Star Trek series – indeed you have to remember, watching this, that ‘Next Generation’ and so on were still to come, otherwise it could look a bit hackneyed. But at the time nothing too similar had preceded it except “Robinson Crusoe on Mars”, over 20 years earlier.

It’s a handsome looking production. The designs are stylish and imaginative and the hostile planet, a blend of studio and location work, is a genuinely forbidding place to get stuck on – a rocky, volcanic wasteland with frequent meteor showers and little native life except carnivorous underground monsters who must surely never get enough to eat.
Dennis Quaid’s character is engaging and sympathetic, if lacking in depth, but Louis Gossett Jr as his alien adversary-turned-companion is wonderful, managing to give a moving, nuanced performance while being unrecognisable in scaly skin and contact lenses.

The first two-thirds of the film are all about the relationship between the two protagonists
as they learn each other’s culture and language, Robinson-Crusoe-style. At this point in time all this feels a bit too familiar from subsequent films, and parts of it might have seemed a little clichéd even then, but on balance it wins out, and things move along quickly enough to avoid getting bogged down in sentiment.

The tone shifts in the final third when outside forces come into play and it becomes more of an action movie. It’s possible to see this in terms of director Wolfgang Peterson, still quite new to Hollywood after making his name with ‘Das Boot’, dipping his toe in that genre while still making a film that is more about the close-quarters character work of the submarine film.
If “Enemy Mine” isn’t quite in the top rank of 80s science fiction, it’s still solidly entertaining, and arguably essential viewing for fans of the genre if only to see how much is owed to it.

As for the Blu-ray itself, I couldn’t find fault with either the image or the sound. Extras are limited to a trailer and an extended scene.

Enemy Mine is out now on Blu-ray and DVD. 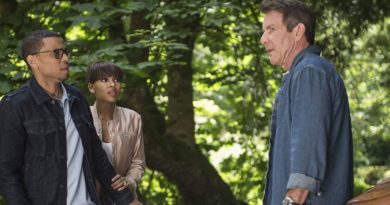