I was lucky enough to attend the launch for EIFF, currently about to commence its 69th year of the festival. It’s a place to gather new and emerging artists, and to celebrate those who are returning. This year, we are getting to see the directorial debut of Robert Carlyle, with The Legend of Barney Thomson. As if directing wasn’t enough, the actor is starring in the lead role as Barney, alongside a stellar supporting cast; Emma Thompson, Ray Winstone, Tom Courtenay, Ashley Jensen, and Martin Compston. Celebrating the best of Scottish, Barney Thomson is not only premiering but also opening the festival on the 17th June.

Although not in the programme, Karen Gillan has a short she is featuring at the festival by the name of Coward – a story about a young girl who is forced to act by her mother. This is one to look out for, especially those who have followed Karen’s career from her Doctor Who era.

Another film that seems to be getting a lot of attention is Iona, another premiere, which is closing the festival on the 28th June. Directed by Scott Graham, this second feature from Graham stars Ruth Negga as the titular character, who’s found international fame in Marvel’s Agents of S.H.I.E.L.D and the long awaited, currently in-production adap of cult comic book Preacher. Writer/director Graham shows remarkable control as he weaves a story that takes in family traumas, religion, domestic violence and pastoral glory, but never losing track of the haunting story of a young woman whose return to the Christian community on the island of her birth is the dramatic core of the film.

There is a wide selection of shorts and this year’s selection of films. There is a very welcome American Invasion, with films such as Manglehorn (Al Pacino), and somber zombie indie Maggie (Arnold Schwarzenegger). Jack Black and James Marsden appear in critical darling The D Train. For horror fans, this year’s Night Moves are showcasing international films, and they all look gory and exceptional fun. Not to be missed if you intend to go!

EIFF are proud to announce that they are also showcasing Dredd 3D and Back to the Future, featuring the Royal Scottish National Orchestra, which is unfortunately sold out. I can only imagine what it would be like to experience that on such a huge scale.

It is physically impossible to go through the whole of the programme in one sitting, and is so jam-packed that this year’s festival looks like you’ll have to make important sacrifices over what to watch. EIFF are offering so much brilliance, it’ll be hard to decide. The line-up includes many other cinematic favourites, and in addition, this year’s In Person event(s) gives us Ewan McGregor and Malcolm McDowell, among others.

At the Programme Launch, I was lucky enough to meet both the writer and director of Chicken. Originally written as a stage play by Freddie Machin, Chicken has been adapted by incoming writing talent Chris New, and director Joe Stephenson (currently prepping a Noel Coward biopic set to star Ian McKellen and Vanessa Redgrave). We managed to speak with Freddie Machin regarding the adaptation of his play, which he and New have collaborated on.

Where did you draw your inspiration from for Chicken? And how did the title come about?

Freddie Machin: In the village where I grew up there was a farming family who seemed to exist on the fringes of the community. Agriculture isn’t something that many people do in the countryside anymore and I was interested in how a pair of brothers might cope with the changing face of rural life. The relationship between Richard, the main character, and his chicken is central to the play and the word on its own, seems to have a simplicity which relates to the way Richard engages with the world around him.

This was originally a play. How did it manifest into a screenplay?

FM: By sheer chance Joe Stephenson, the film’s director came to see the stage play of Chicken which was on for a week at a London fringe theatre in 2011. After that we spent a long time drinking coffee and gradually adapting the script into a story for screen. In the theatre, characters often communicate using a lot of words and my play was no different. Adapting the story to screen meant finding a way to tell the story of text through images, which I found a fascinating challenge.

Did you ever expect to do as well as you have?

FM: I am delighted that the story is about to be seen by a larger audience and no, I never expected to be attending the premiere at the world’s longest running film festival.

I see Sir Ian McKellen has backed Chicken on Twitter! How does that make you feel?

FM: I remember watching Sir Ian play Iago in a film version of Othello as a student and getting goose bumps. To have him praising our film is incredible.

What do you hope to take away from this experience of EIFF?

FM: I hope that the festival will mean that the film is seen by a wider audience. The response we have had so far has been overwhelmingly positive, so it makes us think that we have made a film which can touch a lot of people.

Who is your inspiration, and do you have a dream collaboration?

FM: I used to have a TV and VHS combo machine which I would use to record films in the middle of the night. I would go through the TV guide and watch everything and anything I could manage to record, but the film which I still regard as having the biggest impact on my writing is A Room for Romeo Brass by Shane Meadows. I find his work arresting for its humour, tenderness and humanity, a quality I aspire to constantly in my own writing. In my opinion, Paddy Considine’s consistently stunning performances in this and films like Dead Man’s Shoes deserve much greater recognition than the cult status he has achieved so far.

What does the future hold for you, and what’s next in the works from you?

FM: I am developing various new plays at the moment including a major new human rights drama about the war on terror in Pakistan. I am also developing a new play about the Pilgrim Fathers which will be at Edinburgh Fringe Festival in 2016.

What was it that excited you about the play that made you want to turn Chicken into a feature?

Joe Stephenson: Freddie’s play beautifully handled the complex emotions and relationships of it’s three characters with a rare, and difficult to master, gentle touch. Despite the dark themes and heartbreaking story, humour was never far away, which is always vital for me. I want to be able to laugh with characters before being asked to empathise with them, I actually think it’s essential. I never want to make a wholly depressing film, and humour is a difficult thing to weave into an emotionally challenging story but Freddie managed it effortlessly. The character of Richard, portrayed by Scott Chambers on stage as well as in my film, is also perhaps the most sympathetic character I’ve ever come across. All this, combined with the feeling I could adapt it in a truly cinematic way and avoid any feeling of watching ‘a play on film’ made it clear ‘Chicken’ should be my first film.

How has it been, experience-wise, adapting an original, unique piece, as opposed to something the masses may have expected, like Stephen King’s The Shining, which is more well known/popular?

JS: Whether the story has had mass exposure beforehand doesn’t really come into my thinking to be honest. The story needs to speak to me on an emotional level, and inspire me visually. Its history is irrelevant to me if it does that. Besides, if anything, it’s preferable to tell a story that comes with no audience expectations. This way I am able to make it in my own voice as a filmmaker, I’m able to (hopefully) surprise the audience, and I’m free of outside creative pressures beyond respecting Freddie’s characters and the world of the play. As a filmgoer I’m hungry for original storytelling; the hope is [that] there are enough people out there who are as hungry for it as I am!

Chicken stars Morgan Watkins and Scott Chambers, and for Chambers, this is his first time in a film. This has been classed as “A striking new British drama”. An impressive feature debut for Stephenson about optimistic 15-year-old Richard – troubled with learning difficulties and his restless and abusive older brother. When Richard falls for 17-year-old Annabel (Yasmin Paige, from Submarine) the relationship between the brothers is stretched to breaking point, family secrets are revealed and life for Richard starts to finally change direction.

The Edinburgh International Film Festival begins on 17th June and runs till the 28th.

For a full run down of the EIFF line-up, check out the brochure. 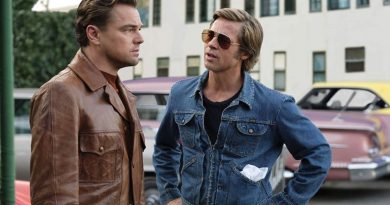 Once Upon A Time…in Hollywood (18) | Close-Up Film Review