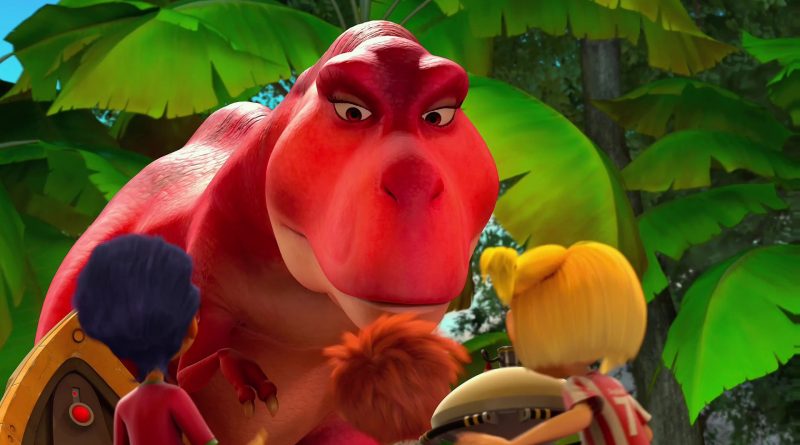 Over the years there have been countless dinosaur movies, many of which have been animated and aimed at very young children. Think back to The Land Before Time franchise that so many of us loved to watch growing up. However, Dino Time is a little different as it combines the era of the dinosaurs with present day time travel.

In the little town of Terra Dino there lives a young boy named Ernie Fitzpatrick (Adlon), who likes nothing more than a good adventure while zooming around on his rocket-powered skateboard. When he is busted by his mother Sue (Lynch) for disobedience he runs to the house of his best friend Max Santiago (Lowenthal) whose father is an inventor. But Ernie’s adventurous side gets him into more trouble than he ever thought possible when, with his trouble-making sister Julia (Strong) hot on his tail, a time machine propels the trio 65 million years back, to when dinosaurs ruled the land.

Times back then are very different to the tales we have been told. Dinosaurs are not sprinting around ravishing each other for food, but rather living quite harmoniously with a mother hen like figure looking out for everyone, a Tyrannosaurus Rex by the name of Tyra (Griffith) who takes in orphans and raises them as her own. Tyra has never been fortunate enough to have one of her own eggs hatch but all that changes when three little ones hatch out of the egg in her nest, or rather a time machine that has timed hopped replaces the real dinosaur egg. These three individuals must save themselves from being stuck in time as well as fend off the evil Sarco Brothers, Surly (S. Baldwin) and Sarco (W. Baldwin) who have their crocodile-like hearts set on ruling the land.

There have been a few movies over the years that have dealt with time travel and for some strange reason egg-shaped time machines have been chosen for several. In the past this has never seemed fitting but when time travelling back 65 million years and arriving in a nest, an egg seems wholly appropriate. Although comedy is basic within the movie, it sits well for the young target audience, especially the way Tyra treats Ernie, the three birds flapping around with their individual personalities and the overall excitement of Tyra’s adopted son.

Dino Time is a very entertaining movie for any age (adults too) with bundles of laughs.

However, there is a twist to the tale to keep an eye out for. When Ernie climbs up the mountain to make an engraving for his mother 65 million years into the future but never gets around to making it, how then does his mother find it? This is a question that will have you pondering to the very end.