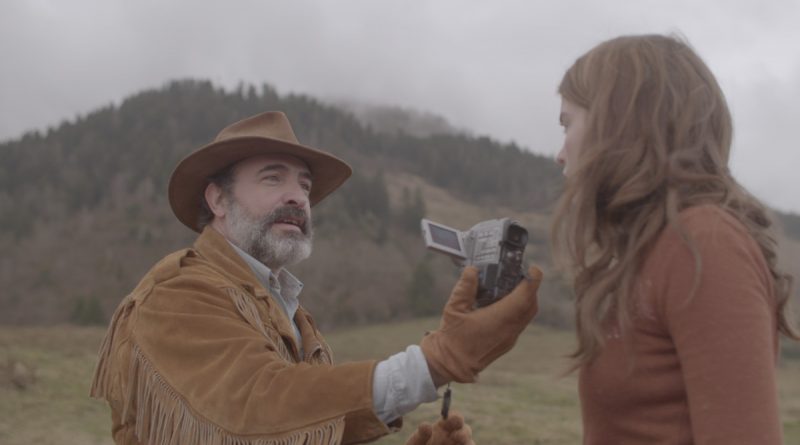 Deerskin is a bizarre offering from French director Quentin Dupieux about a man obsessed with his deerskin jacket.

We first meet Georges (Jean Dujardin) trying to dispose of his rather old fashioned corduroy jacket by stuffing it down a service station toilet.  Anti social and silly – it predictably blocks the loo.  Already I don’t like him.  He then drives on to his destination which is to buy the aforesaid deerskin model – a Buffalo Bill style model with fringing which looks a bit daft on his middle aged body – from an old man who has advertised it for sale and who is so delighted with the inflated price Georges pays for it that he gives him a gift in the form of a digital camera.

When Georges then books into a country hotel we discover he spent the last of his cash on the jacket and his bank card doesn’t work, so he gives the receptionist his wedding ring as collateral.  Turns out Georges is on the run from his estranged wife, she’s blocked his access to cash and he is effectively broke.

Never mind, he has the jacket, which then starts to talk to him, demanding that Georges takes action to make it the only jacket in the world.   Using the video camera Georges sets about doing just that, persuading   gullible strangers to take part in a film he is making in which they give him their jackets and he then runs off with them.

He also persuades barmaid Denise (Adèle Haenel), who is a wannabe film editor to give him all her money to finance his film, using the unlikely tale that his producers/financiers have been stranded in Siberia on another film.  She gets really excited about the footage he has shot and edits away with enthusiasm, while he uses her money to kit himself out in more deerskin gear – pants and boots.

So far we have what appears to be a story about a slightly mad con man.  The film then gets really dark as he starts to bump people off just to steal and destroy their jackets.

The film has been hailed by some as a comic masterpiece.  I am not one of them however.  Dujardin has a certain appeal as the male menopausal anti hero.  But the film is more of a demented ramble than anything resembling a comedy, black or otherwise.

Incidentally the French title Le Daim translates literally as “deer” not “deerskin”.  And from the occasional shots we see inserted at various points for no narrative reason of that gentle, doe-eyed creature, you may well agree that the skin looks even better on a deer.