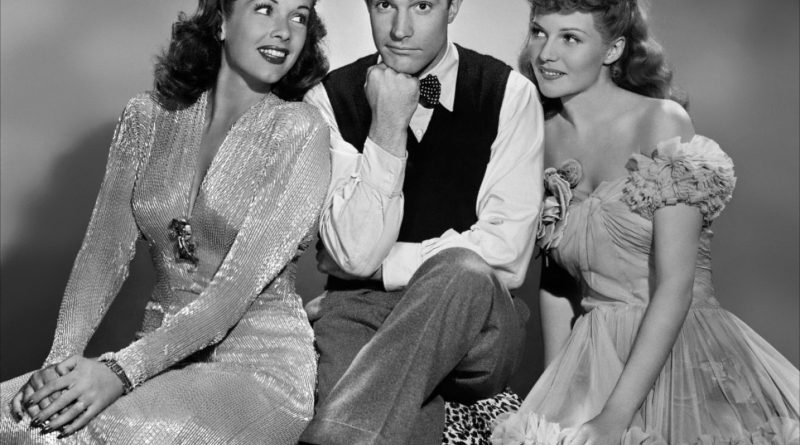 Cheese is Technicolored into spectacle and charm, with a melancholy tinge, in one of the most successful Hollywood musicals of the 1940s.

Nightclub dancer Rusty (Hayworth) enjoys working at boyfriend Danny’s (Kelly) club in Brooklyn. But her world changes when she wins a Cover Girl contest organised by a wealthy magazine owner. Rusty becomes a Broadway sensation, but is fame and fortune a fair substitute for true love?

Part propaganda pick-me-up, part Star is Born style tear jerker, Cover Girl celebrates a neighbourhood kind of love, with the unlikelihood of the denouement glazed over in a rush of patriotism.

For all their spectacle, the big stage numbers are a bit stodgy and un-dynamic. It’s the solo dances that struck me: Rita Hayworth opening up as she swirls around a big theatre stage for the first time; and Gene Kelly’s angry ‘ghost dance’ with himself through a stage version of Brooklyn streets.

It’s interesting how all the dancers’ bodies seem very fallible and human here – glamorous yes, but also a bit awkward, none of that well-oiled human libidinal machinery you get in music videos nowadays. A really good instance is the opening number, The Show Must Go On. The girls are all in a line and all slightly out of synch in their movements (to show that this is a slightly downmarket place they work in). I wonder how difficult it was to choreograph something like that, to build in error, a human factor?

I’m a miserable old goat and proud of it but even I started to well up during the first rendition of hit song Long Ago and Far Away, just after Kelly uses the killer line “it was the best goodbye music I ever danced to”. Once I lost that inhibition I thoroughly enjoyed this. The other standout line is from a dancer who answers the backstage phone with: “Sure I’ll marry you! Who is this, please?”

I still think the first 30 minutes, with all its comrades-in-poverty shtick (tandem tapdances up and down brownstone steps) is a bit too cheesy and optimistic, although it is wonderfully undercut by the sequence after Rusty receives the telegram announcing her big break. That bitter note of ambition – the first sense of conflict and drama – is where the film picks up. Then we’re into a stunning ‘make-up’ montage sequence and va-voom we’re off!

Cover Girl is out on a dual-format edition on 13 February.