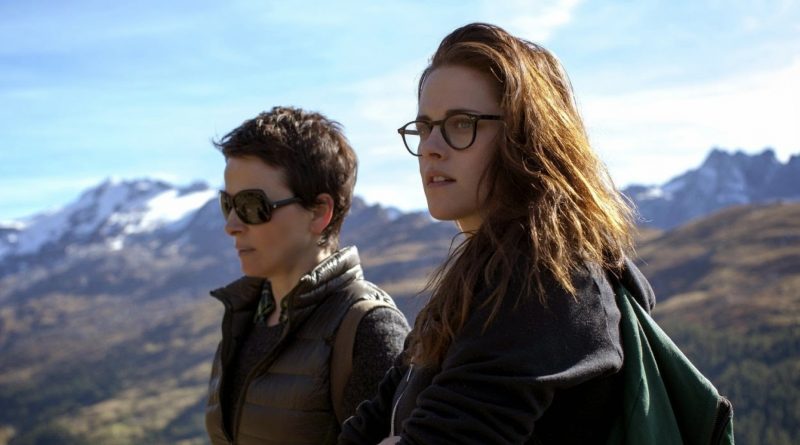 Dir. Olivier Assayas, Germany/France/Switzerland, 2014, 123 mins, in English and French with subtitles where appropriate

Juliette Binoche is electrifying to watch in Olivier Assayas’ latest feature; playing somebody who is not too dissimilar from herself, as an actor ‘of a certain age’ preparing to ‘kick against the pricks’ of younger talent.

Maria (Binoche) is an international star of screen and stage. She’s travelling to an awards ceremony in Zurich with her younger, American personal assistant, Valentine (Stewart), when she hears that the playwright who made her famous has died.

Maria accepts an invitation to stay in the dead playwright’s house in a beautiful but remote area of Switzerland. She also agrees to star in a new production of the play that featured her breakthrough role. Twenty years ago, Maria played the part of a young woman who has an affair with and then destroys a successful, older businesswoman. In the new production, Maria will play the older woman, with a hell-raising young actor (Moretz) playing Maria’s old role.

As Maria and Valentine rehearse lines around the house and on long alpine hikes, the film explores the blurring lines actors experience between role and reality; as well as the competition that can occur between women of different ages and more general issues of the feeling of aging and feeling out of synch with contemporary culture.

The film would be horribly self-important without Juliette Binoche’s turn: she is absolutely riveting to watch as the star who gradually engages with an enemy she at first dismisses – the ‘tides of time’ and their harbingers of doom, younger talent.

Clouds of Sils Maria presents its heroine’s age as a celebration of change. Every fresh shot reveals a new facet of Binoche’s face, her body and Maria’s nature. Binoche/Maria’s presence here evolves, incarnating the joyful notion that age brings nuance and emergent characteristics which it is a pleasure to behold.

Everyone who has seen many of her films will recognise Binoche’s signature outbursts of laughter, amongst other mannerisms. So, it is at a more physical, bodily level that she impresses here; and it’s not just that she’s still attractive as she teeters on the brink of early middle age. The lighting and cinematography present her in almost sculptural terms, adding an element of duration to each revelation of physicality. It is a much more candid, more body-centred performance than, say, Gena Rowlands’ in the similarly themed Opening Night (1977).

Here is an actress many viewers will feel they have grown up alongside – and it’s an inspiration to see her inhabiting her late 40s with such nuance.