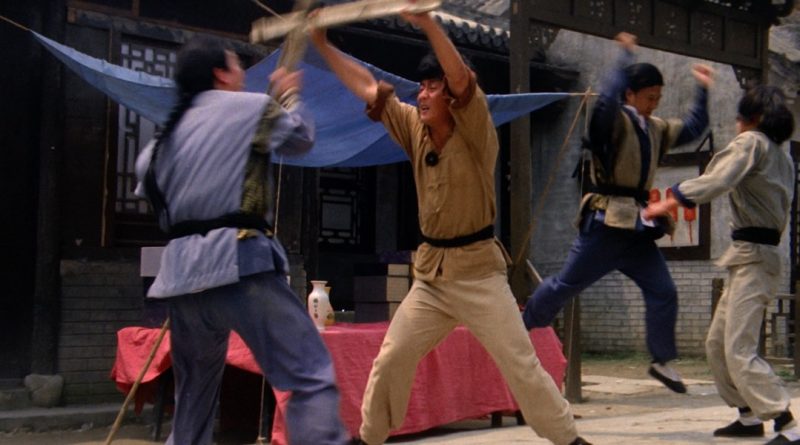 Probably the best home entertainment experience of my year, this well-curated set of beautifully restored, old school kung fu films is a wonder in every way.

Independent writer-producer-director Joseph Kuo was a prolific and successful maker of popular kung fu films in the 1970s and 1980s. These were usually low-budget, stripped-down, lean movies. I’d not heard of any of the films presented here.

As this collection shows, Kuo’s films ranged from simple presentations of martial movement, training and fighting to Dragon Inn style epic wuxia, taking in comedy and sincere paeans to honour and the master-pupil relationship along the way.

Seven Grandmasters, 36 Deadly Styles and World of Drunken Master represent the stripped-down element in Kuo’s output. They are all set in China’s ‘feudal’ past and packed with training and fighting, acrobatics and ritual movement from start to finish.

The framing presentation is so simple and the physical activity so fast and controlled that these films move beyond the hypnotic and into the realm of transcendental cinema. By which I mean that watching the ritualised action, the viewer starts to experience something intangible but powerful that cannot be reduced to the film narrative. It’s an experience of pure cinema affect.

The Old Master catapults the viewer into 70’s Los Angeles, with a tale of good-natured internecine conflict between martial arts schools in the Chinese-Taiwanese communities. The film has a lovely Oriental Funk soundtrack and a big-haired, slightly camp hero in Bill Louie, who specialises in robot kung fu and brings a chainsaw to a gang fight. The film is very funny and there are several long sequences showing Los Angeles in all its glory, including an extended fight on a hotel rooftop.

These films focus on classic kung fu technique, with The Old Master a bit of an outlier with its updated robot moves. The rest of the box set heads off in different directions.

Shaolin Kung Fu is the story of competing rickshaw drivers. There’s lots of gritty street fighting, punching and kicking without a Tiger Claw move in sight. The fighting is presented in close up, with a dynamic editing style to keep the pace up.

Neither film has much to do with the famous Shaolin Temple. For that, you need to watch 18 Bronzemen and Return of the 18 Bronzemen. Again, these have bigger budgets and eye-catching sequences, featuring bronze and gold automata warriors against whom monks must test themselves.

The first film is a mix of wuxia revenge and in-temple training; the second sees the emperor of China join Shaolin temple to improve his kung fu. Both are slightly disjointed – probably because they try to tell proper stories while focusing on the temple training scenes which were a popular trope in kung fu films at the time.

These last 3 films, with their mix of genres, provide strong roles for Polly Ling-Feng Shang-Kuan, who played the younger rebel in 1966’s Dragon Inn.

These films come with:

These films come with:

Cinematic Vengeance is out in a limited edition 4-disc Blu-ray set on 15 November 2021.