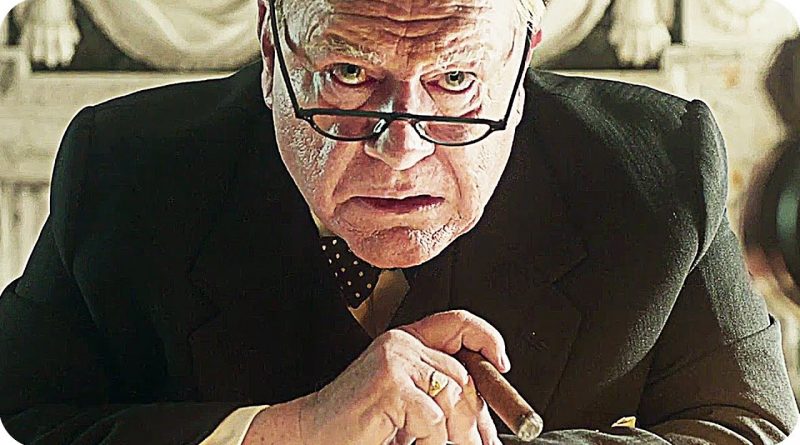 Winston Churchill has been portrayed many times on film and television.  And the further away in time we get from his life, particularly the war years, the more freedom it give us to speculate on the man.  The role has almost become another “King Lear” for the older actor.  Brian Cox has already given us his Lear onstage.  Now he tackles Winston on film.

Jonathan Teplitzky’s film, scripted by historian Alex von Tunzelmann from his own book, concentrates on Churchill in the specific period of the few days leading up to the D-Day landings in Normandy in World War II in 1944

The Churchill of Teplitzky’s concept and Cox’s performance is a conflicted and fearful man.  “Operation Overlord”, to give it its code name, is out of his control and in the hands of American “Ike” Eisenhower (John Slattery) and seasoned British commander “Monty” Montgomery (Julian Wadham).  But Winston, who was responsible for a similar invasion operation in Gallipoli in World War I, which resulted in the mass slaughter of over 500,000 men, fears this operation will result in a similar or even worse loss of young lives.

There are many who now dismiss Churchill as a warmonger and discount his achievement as a leader. This film presents him sympathetically as a complex character without denying the fact that he could sometimes behave like a monster.  Cox disappears into the role from the opening powerful close up of Winston staring at the waves of the English Channel and visualising them flowing with blood as the Aegean sea and Dardanelles did nearly 30 years earlier.  He looks like Winston with Cox’s face somewhere underneath, in a similar way to Albert Finney’s physical appearance in the role in “The Gathering Storm” (2002).

Cox wields the ever present iconic cigar like a defensive weapon.  He captures the multi faceted and contradictory nature of the character in both his frailty and his strength.   Churchill was 70 at this time, subject to the depression which had long troubled him and drinking heavily to dull it.  He tries to pull rank on Ike and Monty to hold back on the operation, but they just regard him as an interfering nuisance and he also tries to manipulate King George VI (James Purefoy) around to his point of view.  He bullies his secretary Helen (Purnell), then later shows her warm sympathy and support when she reveals her fiancé is one of those who will be part of the operation.

As his wife Clemmie, Richardson with a helmet of silver hair and aggressive red lipstick shows us a woman who has weathered the campaign of a difficult marriage and knows her partner and opponent inside out.  There is also interesting support from Durden as Jan Smuts, Winston’s old comrade from World War I and from Purnell, who makes her impact as Helen.

This is an interesting viewpoint on an important historical event but primarily a fascinating character study, brought to life in a charismatic performance by Cox.