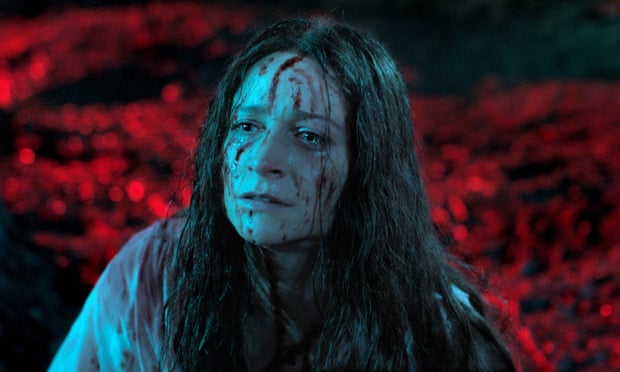 This Brit horror film has a great hook but is spoiled by a hackneyed back story and lack of story development.

Enid (Algar) is a young film censor with the UK’s British Board of Film Certification. It’s 1984 and the ‘video nasty’ scare is in full swing: the newspapers are blaming cheap, easily available VHS format horror films for all the ills of society.

Enid is good at her job: her analytic skills and decisions as a censor still seem spot on. But she is almost pathologically emotionally reserved, at least in part because, as a child, her sister went missing when they were playing in the woods together.

A film is delivered into her in-tray. It bears uncanny resemblances to how Enid remembers her sister’s disappearance. The film is by a mysterious director who can only be contacted through his sleazy producer, Doug Smart (Smiley).

Enid goes in search of some answers, and things go horribly weird.

Niamh Algar is a great lead. She simmers in a shocked state as the oppressive atmosphere builds up around her. Smiley is creepy as hell.

The historical setting and playing with retro video and film formats is well done and atmospheric, without feeling nerdy.

But there is something wrong here. In part, the problem is inherent in stories of mystery, whatever format they are told in: the solution is almost always a bit of a letdown.

But there is more. Watching Censor, you initially ask “what is going on?”. But after 20 minutes, the film focuses on the answer and hammers it home single-mindedly. There are no sub-plots or distractions: when we are not finding out more about the back story of Enid’s sister’s disappearance we are treated to long shots of Enid walking about in a tense fug which I assume is supposed to underline her traumatised state.

This focus should tighten things up, but the infantile disappearance/ cabin in the woods motifs are pretty hackneyed and the explanation falls dramatically flat.

I can’t identify what makes the narrative choices here feel like a letdown, when in other, even more populist horror films they don’t. But it is a disappointment.

The film set finale seems rushed in comparison with the rest of the film, as if dramatic impact has been deliberately sacrificed for shoestring budget mood. Whether this was intentional or not, it doesn’t fit the video nasty ethos: those films tended to be built around one or two scenes of explosive violence – at least before the BBFC got its hands on them.

Luckily, there’s a coda after the finale and this goes some way to making the film satisfying to watch.

The retro feel and quirky, low-budget look of Censor remind one of Peter Strickland’s Berberian Sound Studio and In Fabric. Those films also have problems with satisfying resolutions but perhaps their more intellectual approach enables the narrative quirks to appear more ‘necessary’.

Censor sets up its creepy retro 80s world view well, and the story stays intriguing for the first 40 minutes. But somewhere on the way to narrative resolution it starts to plod. Luckily, a final Lynchian inspiration saves the day.

Censor is out in cinemas and digital platforms from 20 August.