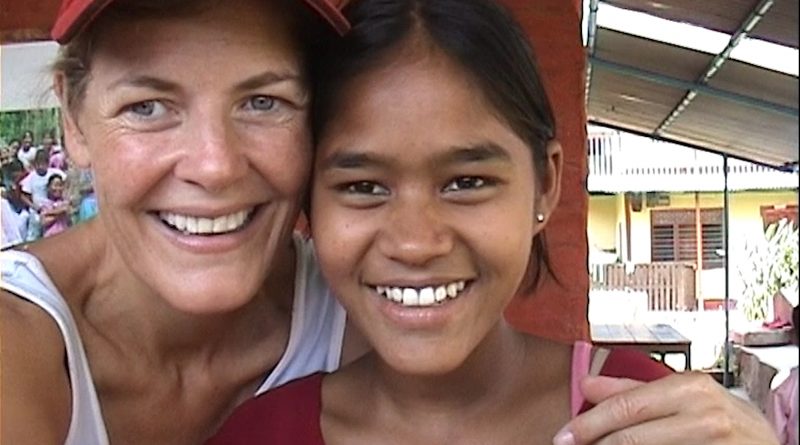 Tideturner Films and Dartmouth Films’ critically acclaimed documentary I AM BELMAYA will be released in honour of International Day of the Girl Child this week.

Winner of Best Documentary at UK Asian Film Festival, the Award of Excellence at WRPN Women’s International Film Festival and nominee for a One World Media Award – I AM BELMAYA has also been honored with an invitationtojoin the United Nations Association Film Festival under the strand ‘Human Rights Films’

From director Sue Carpenter and co-director Belmaya Nepali, this documentary is a searing examination of everyday misogyny and gender-based violence, and, ultimately, how one women reclaimed her voice through filmmaking.

Spanning 14 years of co-director Belmaya’s life, I AM BELMAYA sees her navigate an abusive marriage, a search for education following her youth in an orphanage and a burgeoning career as a female filmmaker in a patriarchal society.

Born in a hill village near Pokhara, Nepal, Belmaya, 28, had little formal education. Orphaned at the age of 9, she moved to a girls’ home in Pokhara and there, discovered photography at age 14. This was also the catalyst for the feature-length documentary I AM BELMAYA, as Belmaya met her future co-director Sue Carpenter by participating in Sue’s ‘My World, My View’ photo project, exhibitions and book.

But then Belmaya’s world shut down. She fell back into a life of domestic drudgery and poverty, with an abusive husband and baby daughter. By the age of 21, she’d given up hope. Then in 2014 she got the chance to learn documentary filmmaking. I AM BELMAYA follows her growing passion for the craft and her battle for independence, in the face of violent opposition from her husband. This leads to a dramatic confrontation, when she finally takes the power into her hands.

Her graduation film, ‘Educate Our Daughters’ has been selectedfor 7 international film festivals, and won 3 awards, including Best Short Film at UK Asian Film Festival and Best Women’s Film at NCIFF.She was commissioned to make her second film, Rowing Against the Flow, about boatwomen in Pokhara, by Thomson Reuters Foundation. Now a single mother, she lives with her daughter, Bipana, 8, in Pokhara.

Written, directed and produced by Sue Carpenter, the film is a collaboration between her and Belmaya as well as a testament of their long-lasting friendship.

Sue Carpenter, whose own daughter was adopted from Nepal, has been involved in women’s rights there for 20 years. A journalist and photographer, she moved into filmmaking in 2013. Her first film, There’s Something About Molly, won Best Short Documentary at the Good Dog Film Festival in Sydney, 2016. She has gone on to make several short films including Alice and Nana (2016) and The Wonderful Walk (2019). Sue co-founded Asha Nepal, an NGO supporting trafficked women in Nepal. In 2006-2007 she lived in Pokhara, running the My World, My View photo project, where she met Belmaya.

Sue is also a Trustee of GlobalGirl Media UK, empowering young women through digital media training. I AM BELMAYA is her first feature-length film.

The film’s Executive Producer Christopher Hird is a leading figure in UK independent documentary filmmaking. He founded Dartmouth to pioneer new ways of funding, producing, and distributing feature documentaries in the UK — particularly those which aim to have an impact. His film credits include:The Ponds (2019), BFI London Film Festival selected One Man and His Shoes (2020); HotDocs selected Bank Job (2021), McCullin (2013), Still the Enemy Within (2014), The Divide (2016); A Cambodian Spring (2017) – the only documentary nominated in the Outstanding Debut category at the BAFTA Film Awards; Children of the Snow Land (2018) and Massacre at Ballymurphy (C4, 2018) – nominated at the RTS, Broadcast and BAFTA awards.

Co-director Belmaya Nepali said: “I used to be a different person, unable to speak, dependent on others. My parents died when I was young, I had to work in the fields, and I missed out on much of my education. That’s the biggest thing that has held me back. If my brothers had sent me to school, I would have progressed further, I could have stood on my own feet. But they didn’t focus on me.

When I first picked up the camera at 14, it opened up another world. Through filmmaking I learnt to use my brain more. It has helped me see life from different perspectives. If you only look from one angle, you can’t make a film.

I wanted to turn what I’d learned into reality and move forward. In our society girls are behind. We are always being discriminated against. That’s why I made my film, Educate Our Daughters. I want to inspire other Nepali women to pursue their dreams and strive for independence. My message is, ‘Don’t stand back thinking you can depend on someone else. You’re the one to look after yourself.’

Because of filmmaking, my inner strength has grown. I’ve learned to advocate for myself. Now I’m unafraid to speak my mind, no matter what others think.”

Director Sue Carpenter said: “I am thrilled that Belmaya and I are finally sharing our film with audiences far and wide. We first met in 2006, and completed this film in 2020, so it has been a very long journey together.

It was paramount for me that Belmaya should not be the passive subject of this documentary but take an active role in the telling of her story. As she became a competent cameraperson, so she took more control of the filming, taking us behind closed doors to the heart of her life as a wife and mother.

Belmaya wanted to share her story to shed light on the struggles for so many girls and women in Nepal, where they suffer from a lack of education, rights, and respect. But her story is not unique to Nepal – it’s everywoman’s story and will resonate with anyone who has had to fight to be heard or treated equally.

Having the tools to tell her own story, along with the platform to express herself, has transformed Belmaya’s outlook. During lockdown, we held private charity screenings online, and not only raised funds for projects in Nepal, but received many messages from viewers saying how inspired they were by Belmaya’s determination and courage.

Our mission for this film is that it will serve as an advocacy tool for women’s rights worldwide, and will inspire other girls and women to speak out, stand up to injustice and reach for their dreams.”

I AM BELMAYA is released in cinemas and on demand at Curzon Home Cinema and BFI Player from 15th October.  www.belmaya.com