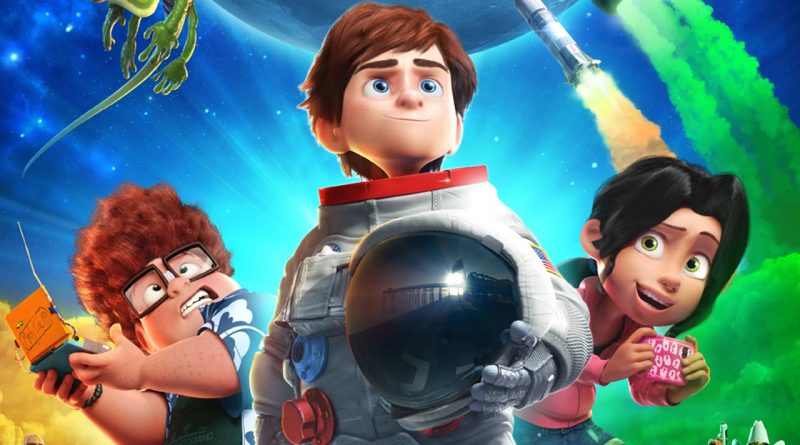 The last time an animation blasted audiences to the moon with such a casual disregard for physics or the plausibility of the astronauts (or astro–dogs/lizards) was Aardman’s A Grand Day Out, 26 years ago. While it has been one giant leap from stop- to digital animation for Paramount’s Capture The Flag, it stumbles short in the narrative and struggles to push any of the boundaries of modern conventional children’s movies.

The film is not precious about the trajectory of its journey, as practically the whole arc is shown in the theatrical trailer. It’s one that provides no surprising twists or unanticipated disasters. The only character to be held back is the oil tycoon villain of the piece, Richard Carson (voiced by Dani Rovira), who is a problematic ‘baddie’ for a number of reasons. Mike, Amy and Marty are the three friends at the centre of the story. Mike and Marty’s fathers are part of the latest NASA program when it is postponed to 2020. Mike admires his astronaut father and the slightly mysterious grandfather who was spurned for the lunar mission in 1969. Marty is a bespectacled prodigal engineer with a Cloudy With A Chance Of Meatballs–esc unappreciated genius, half ideas, half barely-operational improvised gadgets. He is also notably larger than the rest of the slim, perfectly formed animated friends. Spoiler: he doesn’t get the girl. Aside from the accidental kiss on the rocket, the ‘will they won’t they?’ relationship between Mike and Amy doesn’t inspire. Of course, the two manage to make it to the flight module and lock themselves in. The only option – two children must fly to the moon to capture the flag that proves the Apollo 11 mission was genuine and simultaneously attempt to save the world from Carson, who wants to mine Helium-3 from the moon and increase his monopoly over Earth’s energy requirements. No sweat and 100% possible.

The opening sequence features an improvised team-game comprised of planting a flag in a buoy whilst windsurfing. It is mirrored nicely later, in more perilous circumstances.

The family of aeronautical Goldwings form the spine of the film, as they do the story of spaceflight inside the world of the movie. ‘Grandpa Goldwing’ is a stubborn, curmudgeonly old man with apparently no interest in his son or grandson. Despite his daughter-in-law’s plea, he does not even attend his son’s birthday, continuing a 20 year stalemate. His stoicism is well-pursued as the filmmakers resist revealing his reasons until you completely believe his cold, almost callous personality.

The cynical eye of an adult has plenty of moments to sigh at; the recycled jokes, the stereotypes and the endless implausibilities. For a film which pivots on the authenticity of the moon landing, the initial step we see on the moon makes no indentation in the dust, an image made famous by that landing. More annoyingly, the children that stow away on the spacecraft somehow have NASA suits in kid-size…

Of course, the film is pitched at children, while parents are the personified wallet and bonus adult-priced ticket. Most of the niggles that persist throughout will no doubt pass them by in the fun of the adventure. As a PG, they deserve a bit more respect, but the general thrust of the action, the space settings, ‘funny’ moments and general plot will probably please most, and the younger ones more universally.

However, as this is the chosen target audience there are a number of problems with the villain. Stereotyping is fine, it’s a replication of things we recognise, but the catchphrase “It’s no hitch, if it gets you filthy rich” was a poor choice. In a movie where characters are casually killed or reputations are ruined under this banner, it isn’t enough to say that he is the villain and children will understand everything he says is just because he is ‘bad’. Richard Carson’s obsession with his father’s legacy Equally worrying as it is clearly meant to mirror the Goldwing’s two paternal figures. Considering the attention given to the anguish caused by the All-American, hard-working Goldwing family’s underlying self-obsession, no-one seems to care what has made Carson so neurotic. Not care and not ask. Children have surely grown out of such black and white.

Marty is a whole other can of worms. The fat, ginger kid is the geeky loser and at one point is literally the butt of the joke. The circumstance around that particular gag is actually quite funny; one of the few adult titters. Otherwise it’s just a bit lazy. The children in the screening laughed a few times and seemed generally interested throughout. It was probably the family heart-to hearts that had them at their fidgiest.

If you have kids, it’s a diverting hour and a half. It doesn’t set the moon alight, but it’s not boring.