These 3 films from one of silent comedy’s essential actor-directors showcase his athletic, comedic and dramatic range. There are also some surprising technical flourishes, showing that Keaton worked creatively behind the camera as well as in front of it.

In The Navigator, clueless toff Rollo (Keaton) is stranded with his belle (McGuire) on an empty passenger ship. There are excellent sequences as the impractical duo attempt to make breakfast, and traipse around the spooky, deserted decks at night. Surreal humour gets a look in too, with the portrait of an old sea dog swinging over an open porthole every now and then as the ship bobs around. In a famous last reel, Keaton dons a deep-sea diver outfit and goes underwater to fix the hull. And when he emerges from the water, he has a full-scale fight with blackface cannibals on his hands.

This kind of comedy has been over-coded by the streamlined cartoon hi-jinks of a later generation. It is hard to make sense of the physicality of the human actors. You must concentrate to understand what is going on and what it entails for a human body interacting with physical objects in the world. The immediate, tactile quality of the action has been lost to us because of cartoons and special effects, which is why one sequence, in which Keaton shuffles a pack of sodden playing cards, really hit home. You can really feel what that feels like, the clammy resistance of the mulching cards.

Seven Chances sees boring clerk Jimmy (Keaton) inherit 7 million dollars on the condition that he gets married within 7 hours. His boss has the bright idea of putting an ad in the local paper and the church is swamped with would-be wives. Jimmy runs off and, in another rightfully famous reel, is chased by dozens of bedecked brides. The environments they chase through go from urban to rural and become increasingly surreal, including a chase back and forth between immense “boulders”.

Battling Butler is a different film altogether. Keaton plays another clueless toff who pretends to be a famous boxer – “Battling Butler” – to impress a girl he meets while glamping. The training and fight scenes are very physical and bordering on the brutal. In fact, Martin Scorsese said that Battling Butler was one of the influences on Raging Bull.

Seven Chances and Battling Butler also feature the wonderful Snitz Edwards. He is very good as Keaton’s butler in Battling Butler. Snitz has an indescribable face, a bit like an older, more damaged version of Keaton’s own. He is a joy to behold.

Extras include a video essay about all 3 films by David Cairns, a documentary about the role of boats in Keaton’s comedy by Bruce Lawton and several audio interviews with Buster Keaton from the 1940s to the 1960s. 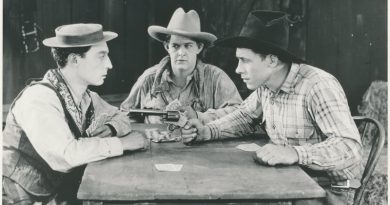