This film about a teenage boy struggling with his sexuality is written and directed by a woman, Eliza Hittman and was highly praised at this year’s Sundance Film Festival.  And as her central character, Frankie, who lives on the outer edges of Brooklyn, she cast not a local but unknown young British actor, Harris Dickinson.

The beach rats of the title are Frankie and his chums, who lurk and swagger around the Coney Island beach front and funfair, where there seems to be a fireworks display every night, smoking dope and showing off their macho masculinity.  At home however, where he lives with his mother, sister and dying father, Frankie haunts a gay chat room, where he makes contact with the older men to whom he is attracted.  At the funfair he hooks up with determined teenage girl Simone (Weinstein), who is determined to get him into bed but not surprisingly their sexual encounters are a bit of a damp squib.

Reflecting its central character, the film is verbally inarticulate, lurching abruptly from one short scene to another in a very American” indie” style and communicating the story through its visuals.  Which is valid in view of the subject matter but self examination without insight can get somewhat tedious.  While we feel sympathy for Frankie, his teenage struggles with his personal conflict do get a bit tiresome and one can only sympathise with his mother Donna (Hodge) in her futile attempts to get through to him.  The film would have felt more textured if we had got to know more about that relationship and some of the other characters in the film, rather than being so totally focused on Frankie.  As it is the aimlessness and confusion of the central character’s life sometimes make the film itself seem aimless and confused to the outsider.

The sex scenes in the film are appropriate and well and sensitively handled, the subject itself a very valid one for dramatic exploration and Dickinson give a convincing performance as Frankie.  But the film’s lack of coherence does become irritating at times.  Back in the fifties for example director Elia Kazan and his screenwriter Budd Schulberg made Marlon Brando’s inarticulate wannabe boxer compelling through his interaction with the other characters.   Frankie seems to hardly connect with the people around him.

One character who does make a strong impression comes towards the end of film in the small role of Jeremy, well played by newcomer Harrison Sheehan.  He is a posh boy from uptown, who comes over to the potentially dangerous wrong side of the tracks in the hope of sharing his weed and his body with Frankie. Like Dickinson, he too could be a young actor to watch. 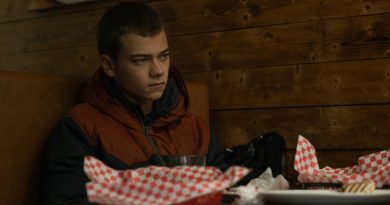