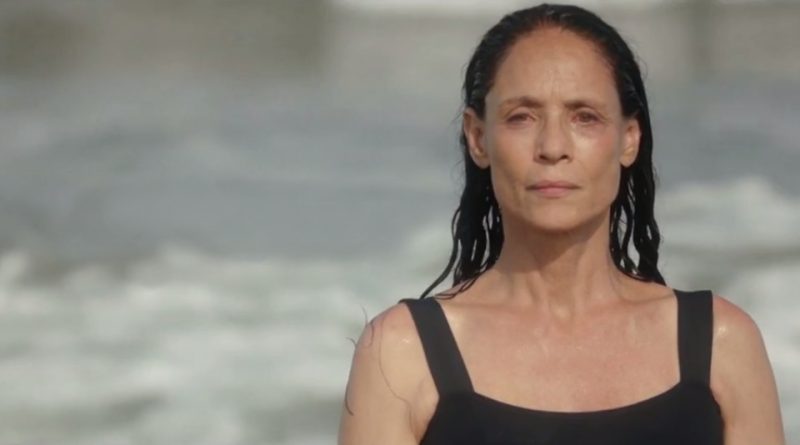 There are a lot of good things about this Brazilian film, most notably the performance of the still luminous Sonia Braga in the lead. She plays 65 year old Clara, who has lived for years in a pretty, low rise apartment overlooking the ocean, where she has raised her family.

However a development company has  plans for the site and has bought out all the other residents.  But Clara refuses to leave the home that holds all her lifetime memories.  It is a situation which has a certain universality about it throughout  the contemporary world.

The film opens in 1980, when Clara, still a young woman and played in these scenes by Barbara Colen, is surrounded by her family and hosting a party for her aunt’s 70th birthday, in the course of which we gather that Clara is in recovery from cancer.   We then cut to the present in which Clara is now widowed and living alone. These facts and others are gradually revealed to us.  The situation with the developers;  the fact that she now lives alone, as her husband is dead and that there are certain conflicts with her now grown up children, particularly her daughter, all of whom are uneasy about her living in an empty building.   We also learn via her love of music and collection of old vinyl LPs that in her working life she was a high profile music journalist.

The conflict with the developers at first appears quite civilised but it gradually gets tougher.  The initial veneer of civilised politeness on the part of the young man in charge is progressively stripped away.  A noisy sex party is held through the night in the apartment above hers and the veiled threats from the developers become more overt. There are also touching moments in her personal life, most notably a scene involving an elderly suitor, who brutally loses interest in her when he realises she has had breast cancer surgery and another when on the recommendation of a woman friend she hires a gigolo – a scene which could have been gratuitous but is delicately handled.  Though maybe this is what gives the film its somewhat puzzling 18 certificate – the “shocking” idea that a woman in her sixties could pay for sex!  The film also touches on the economic differences in Brazilian society, when Clara visits the home of her housekeeper, who lives in the poorer section of the town.

The story telling itself is however sometimes confusing.  In the opening sequence a lot of attention is devoted to the aunt whose birthday is being celebrated, including flashbacks to her sexy past, which lead one at first to think the story is going to be about her.   When we switch abruptly to the present, it takes us a while to realise that we are now in a different time zone.  At first you might well think this is the morning after the party.   The story telling tends to meander a bit, making us work hard to pick up on the facts of Clara’s past life and sometimes wandering down some byways which are not always totally germane to the central story.   And at a running time of nearly two and a half hours it is frustrating that the situation with the developers, which takes a distinctly dramatic turn, is still not totally resolved by the end of the film.  There are some documents unearthed by Clara and her solicitor which appear to be important but we never find out why.

However there is still plenty to enjoy in this character study of a vibrant older woman and the history which has made her.