Close-Up took a metaphorical walk down London Road with the screenwriter/lyricist of the film, Alecky Blythe, and Anita Dobson, who plays June.

The film is undeniably remarkable. It is a musical, but not a conventional screen musical. Firstly, it is adapted from the National Theatre production of the same name, also scripted by Blythe. Secondly, the material is collated from verbatim raw interviews, word-for-word in content and delivery. Lastly, the events are based around the murders of five women in Ipswich in 2006. Blythe interviewed the innocent residents at the epicentre of the media whirlwind and subsequent court case. These people live on London Road.
Blythe discussed the transition from stage to screen and how the collaborative process affected her decision-making. She explained what it’s been like to be on the other side of the Dictaphone, the ‘Serial’ podcast and her upcoming work for BBC Four. Anita Dobson spoke about meeting her real-life counterpart, accepting new challenges, partying on set on her birthday and where the humour comes from, in what might seem an otherwise macabre subject to set to music.

When did you first hear about the project and what peaked your interest?

It was when they approached me for the film. I hadn’t seen either of the stage plays and knew very little about it.
I thought, this is new, groundbreaking. Rufus Norris, ‘I thought, wow, I’d like to work with you please’ and ‘Alecky and verbatim theatre, who knew that was happening?’ and ‘wonderful Adam Cork who wrote the score’. It was all a mixture too good to say no to.

How did you approach ‘verbatim’?

Initially, you have to listen to the voice of the character you’re going to play who is alive and well and living somewhere in Ipswich. You have to repeat verbatim what she said. You listen and if she says it, you repeat it, if she says it, you repeat it, and that’s how you kind of learn it. That’s the way they did it for the musical. The [had] earpieces [which] were discarded sometime during the first time the musical was done and they just had to rely on themselves and the script.

How did you feel about the very humorous tone, when set against the tragic real events?

It kind of works, the film works. It shouldn’t, but it does and what happens to the people in the film because of the way it’s done, comes across very very real, like they’re living it. They are the people in that situation and they’re talking directly to you so it’s very successful. It was an unusual challenge and I was very proud to be on board and be a small part of it.
It was a very happy shoot with a subject that ‘s not easy and I think what’s happened to the film is that there is humour because the characters are quite quirky and humans are quite amusing because they do odd things and say things you don’t expect them to say.
[Rufus Norris] shot a lot, there was a lot of footage and the editing was a brilliant job. You came away from the film with a strong feeling of those girls. Right the way through, it was central and that’s what you come away with, the plight of those girls. As a result of the film they got off the streets and off the drugs and the area got cleaned up. People wanted to help the girls in that situation – not wanting it to happen again. Out of something awful something good has come.

You talked about the fact you are playing a real life character. Did you meet your counterpart?

I did meet her and it was amazing but she’s gone now, sadly we lost her a couple of months ago. She came on set for the street party scene as all the residents were invited along, and I thought this is bizarre, I’m playing June and there is June, she’s sitting in my seat. It was strange and wonderful too. We embraced all the residents and it became a street party for all of us. And it was quite moving because we were celebrating the end of the film and they were celebrating coming though all that awfulness. We found a place that made them stronger as a community. And there was an odd moment I feel when Rufus had got all the shots he needed and he said keep going, keep rolling. It was a sort of happy, mad, party feeling that happened. It was truly wonderful, a freeing cathartic thing to happen. It was also my birthday and I thought it was all for me.
I was thrilled to meet June, she was adorable.

Was the casting done in order to make the cast similar to the residents?

I’m not sure. June had very black hair and quite long. I asked Rufus whether he was asking me to dye my hair. My hair has stopped being dark (and then red) and as you can see nature has now taken its course, but he said to use my own hair colour. Hopefully I was embodying the spirit of June even if I didn’t try to look exactly like her. I think it worked because I had permission from Rufus, a kind of freedom to deliver the essence of the character, that person you’ve seen, the sound of her, the look of her but it also gave me a little leeway to filter a bit of me through.

What was your perspective on the adaptation and was there anything you thought was ‘lost in translation’?

We knew we wanted the film to be a certain length, about one and a half hours. The show was two hours long and had to be cut. There are some bits of the verbatim material that I miss a bit. I think with theatre the audience does a lot of the work, visualising in their mind’s eye and painting the pictures. There is involvement that theatre requires you to do and there’s a real joy in that. In film that work is done for you; you are given the visual stimulus. I miss the verbatim bits that had to go to make it more filmic. It’s more of a visual medium so I had to kill a lot of babies. [Note: this is a metaphor, please don’t send angry letters]

Did Rufus Norris and Adam Cork persuade you to lose anything that you regret?

[It makes you ask yourself] Why is this here? You are forced to fight for things and maybe there are battles that you don’t win, maybe they are the ones you shouldn’t win.

We moved on to beginnings. Most musicals struggle to segway from dialogue to song. Had she avoided these cringeworthy moments?

I’m not a great fan of musicals; I’m a bit of a snob about them. And I do cringe at the transitions from speech to song. I had wondered whether I could make something with verbatim that was a little rougher so the lift off moment was not quite so obvious.
Writing for a film demanded a different approach to conveying her material.
A big note that I was a getting was trying to weave these London Road residents earlier into the story before I actually met them. I only met them when the arrest happened in London Road. I only had them talking in the show retrospectively about what it was like at the time, not really living through it.

How did you connect what had happened to London Road (as we see in the film) to your initial interviews so many months earlier?

I went back to Ipswich to gauge the mood of the town and in the local paper there was a picture of London Road with hanging baskets and the ‘London Road in Bloom’ competition. My focus shifted and narrowed. Until then it was more general about the town. The narrative of the story only happened as I discovered it myself, in real time.
There is a popular American podcast called ‘Serial’. Alecky had listened to it and reflected on comparisons between the recorded interviews and journalistic techniques that they both use.
She [Sarah Koenig, the podcast’s presenter/investigator] kept the tape on so much, like I do and it captured her own [feelings], a sense of her, her worries and vulnerabilities. She was open with that. I take that to my interviewing as well and hopefully people respond to you equally.

It was a turnaround, me answering the questions and not the other way round. I’m the worst for umming and err’ing . It’s kind of weird having it the other way round but I think I’m getting used to it.
The irony of this answer is that Alecky relies and champions these stumbling patterns of speech. They are in fact, a large part of what makes her work so successful.

How did you get into it?

Verbatim started because I was an actor not getting enough work. I planned to get an agent using this technique. I’ve ended [up] creating more work than I’d planned. I took to it as an actor and really enjoyed it. I wrote a play and the play ended up with a proper run and I got a literary agent!

Are all your pieces based on real life?

When can we see more of your work?

I’m doing a project with BBC4. Rupert Gould is curating eight short films and I’ve written one of them. It’s verbatim again, about a couple of homeless guys; a Waiting for Godot piece. It’s [a] dialogue [series of programmes] and verbatim is dialogue heavy so he thought of me. It’s about friendship and is dialogue heavy so there’s no pressure for big moments of action…

London Road premieres on 9th June via NT Live and is on general release on 12th June. Visit londonroadfilm.co.uk for more information. 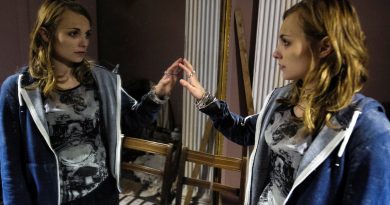