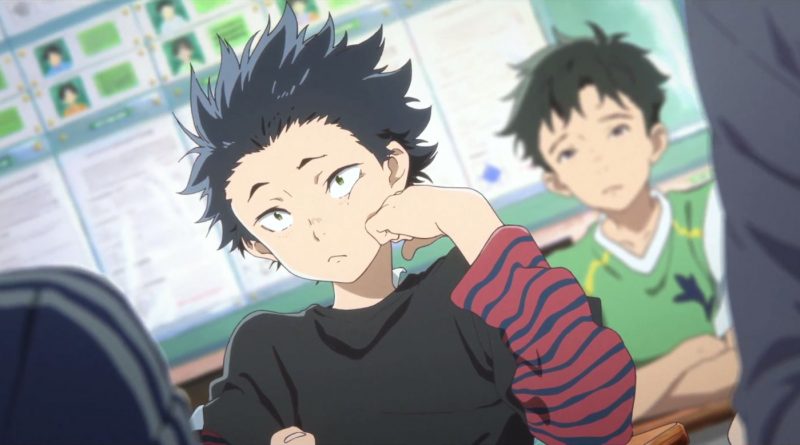 Anime Limited promises distribution of “the cutting edge of what Japanese animation has to offer” and A Silent Voice certainly fits their remit. Close-Up were full of praise with the last film of theirs Your Name. The latest pushes the envelope of animation even further, but the message is somewhat lost in the post.

The most obvious silent voice of the film refers to a young deaf schoolgirl called Shoko who joins a new class containing an insensitive Shoya. Her new classmate begins to bully her, frustrated by and misunderstanding her disability. The two are reunited with their each other and others from that class five years later, who were equally divided by the tension caused by Shoko’s victimisation. Shoko accepts Shoya’s apologies readily but somehow this doesn’t help assuage the guilt of his juvenile behaviour. The bullying seems to scar him as much as it did Shoko. He even considers suicide.

The material is all weighty stuff, but the storytelling is far too fractured. There are promising images to compliment the inaudible world Shoko is immersed in; raindrops rippling across water, people with animated crosses on their faces to symbolise Shoya’s alienation from those around him and absences of dialogue are substituted by sheets of paper or sign language in order to deliver emotional messages, physically rather than verbally. The alternatives to dialogue resonate brilliantly in reflecting the difficulty of the deaf world the film seeks to explore. It’s hard to see where The Rolling Stones blaring over the opening credits fits in with this aesthetic though. Also, frustratingly many of the white subtitles appeared over white backgrounds such as school shirts or most frequently – Shoko’s white scribing pad.

There are also some very moving flashpoint scenes. When Shoko’s ears bleed, the red drops are completely startling. Similarly, there are two moments dealing with suicide which both bring into sharp focus events leading up to that point. However, these crystalline scenes are proportionally small reward in a two hour plus feature which spends far too much time revisiting the same situations and bringing in more and more characters. It’s not only oddly repetitious but is also simultaneously broken apart by trying to overcomplicate the story with two timelines. Your Name, which has nothing to do with A Silent Voice aside from sharing the same Scottish distributor is nonetheless a perfect counterpoint. Your Name was terrifically complex in using parallel timelines, exploring memory and by questioning conventional realities. It was successful because of its tight control over few characters. A Silent Voice attempts the opposite: an in fact very simple narrative, but with the opposite approach – too much periphery. The two leads are great characters, both of their families provide differing contexts to their personalities as the story grows and thus adding depth, but by being so long it waters down what is most interesting in an important project of which it is such a shame to criticise.

Added to the good works ploughed here, are the triumph of two lead female filmmakers in putting it together. While this may not have achieved the heights it aimed for, the future is hopeful for anime fans with kudos to Anime Limited (or All The Anime) for bringing them over from Japan.

A Silent Voice is in select cinemas from March 17th