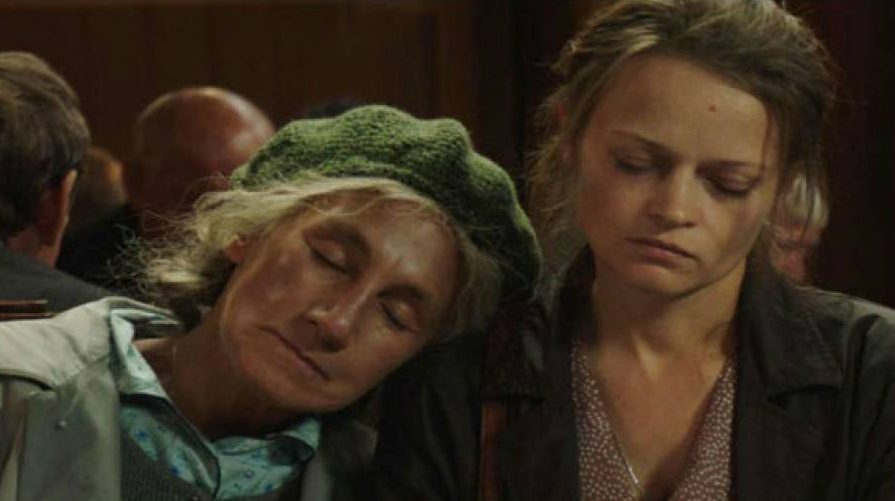 A Gentle Creature is a very strange film: it mixes realism with fantasy. The film grabs the attention from the beginning and never lets up. A seemingly straightforward story develops into imaginary sequences so that we often don’t know what is real and what is pure imagination. The starting point is a short story by Dostoyevsky.

A woman (Vasilina Makovsteva) – no name is given but we know that she is the gentle creature of the title – wants to send a parcel containing food and clothes to her husband who is in prison. When the parcel is returned to her without an explanation, she sets out to on a long journey to the prison in Siberia. Built like a fortress, she can’t gain entrance. The woman finds herself turned away – again with no explanation. A seemingly kindly local woman (Marina Kleshcheva) takes the woman to her guest house. This turns out to be a literal nightmare with children running all over the place and lewd behavior on view.

After she escapes from this, her waking nightmare continues and develops into real or imaginary incidents of violence and horror. Makoysteva gives a lovely performance so that we believe what is happening to her is real until suddenly we realise that many of the events are in fact hallucinations or dreams. The visionary aspect is wonderful with the cinematographer capturing scenes from the main action and then showing us glimpses of the background and often catching part of conversations. There is real power in the film of a woman living in hell on earth – or at least in Russia!

We never know what crime the husband has been accused of, nor what has happened to him. There are a series of little scenes where very strange events take place. The actors commit to the story and to their weird characters and it is fascinating to watch.

But I wouldn’t want to see it again!