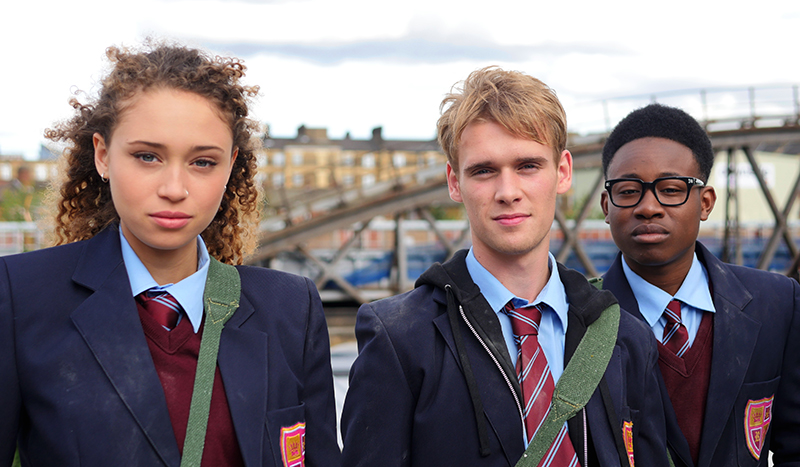 What would you do if you only had two hours to live? What would be on your bucket list? What regrets would you have?

This is something that becomes far too real for budding graffiti artist Tim Edge (Jarvis) when he stumbles across a secret press conference after sneaking away from a school trip to the Natural History museum with his two pals. The press conference is to celebrate The Vitalitron, a new invention by scientist Lena Eidelhorn (Redmond) that has the capability to analyse DNA of any living thing and predict the amount of time you have left until your death. When Tim sneaks a closer peak, the machine tells him he has only two hours left to live. After finding this out Tim and his pal’s create a bucket list of things Tim wished he could do – kiss the girl, ride a motorcycle, conquer a fear of heights – nothing too extravagant or out of his league although sneaking into a closed art gallery may cross a few boundaries. Quick on his tail are London tabloid journalists, Tooley (Walsh) and Graves (Larwood), who want to see what happens as the clock strikes the two hour mark and being guided by Lena who wants to ensure the Vitalitron’s prophecy is fulfilled.

The ending is a little predictable from the minute the “two hours left” announcement is made. Having said that, it does leave you a little anxious as the time approaches and you want to find out what happens next. Between the three main cast members as teens looking to fulfil the last two hours of your life, you would think they may be a little more anxious about the upcoming loss of a life however then tend to take things in their stride, with one a little more of a clock watcher than the others. Tim’s young sister (Piolini-Castle) you actually feel quite sorry for as her mother just goes about her daily business and her brother treats her unkindly and she is having such a hard time with school. That is why the manner in which Tim aids his sister at school and supports her in a very nerve-wracking experience towards the end is quite heart felt and makes you think about the regrets and behaviours that you have/do on a regular basis without thinking about it until the time comes that you think to yourself “what have I been doing all this time”. In terms of a comical side, the still photographer character (Larwood) in general you cannot help but chuckle along with.

There are a few odd moments and some small yet obvious mishaps in the movie; most notability when Tim is jumping from rooftop to wall and one minute has his bag across his shoulder and the next he does not.

Although 2: HRS is engaging, leaves you a little anxious and curious about what will happen at the end, once it has finished it feels like it lacks some concluding elements, things that could have been wrapped up after the final scene just to demonstrate how Tim’s life has changed for the better since his “seize the day” (or two hours in this case) experience. Did he get the girl? Has his behaviours and emotional relationships with those around him altered for the better? What ever happened to his graffiti artwork? These are just left unmentioned again. Lastly, the biggest question is never answered – what in the world is that little creature Tim carries around in a cardboard box that looks like a something from a  Men in Black  movie? I guess some things are just not to be revealed.

2: HRS will be available on VOD from 30th July