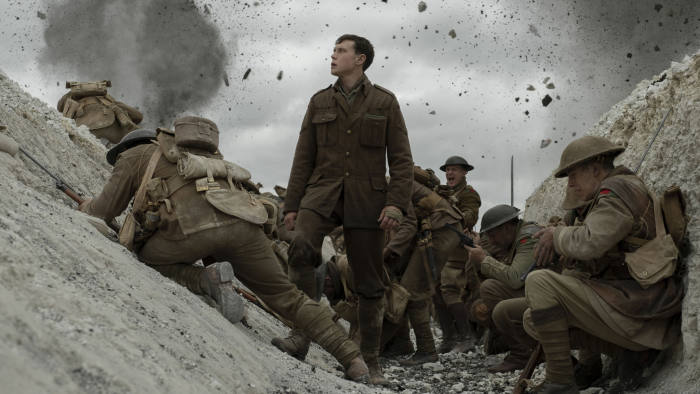 Sam Mendes has crafted a film which, in this tale of two young British soldiers racing across enemy territory, sweeps across huge areas of devastated land, dead horses, deserted farmhouses and decomposing bodies. To show this the use of IMAX is almost essential in getting literally the whole picture.

Watching the film at the Swiss Cottage Odeon IMAX, I felt an immediacy and involvement in what was happening on the screen in front of me.

You will have read the review of 1917 already on the Close-Up Film website. My review here focuses on the impact of IMAX on the cinematic experience.

Those with technical knowledge tell us: specially formatted for IMAX cinemas. 1917 features an expanded aspect ratio for the entire film. This means that IMAX delivers audiences up to 26% more picture on screen than any other cinema. In addition, the IMAX release of 1917 has been digitally re-mastered into the image and sound quality of The IMAX Experience® with proprietary IMAX DMR(r) (Digital Re-mastering) technology. The crystal-clear images coupled with IMAX’s customised theatre geometry and powerful digital audio, create a unique environment that makes audiences feel as if they are actually in the movie.

Indeed, watching the two young men crossing the land where at any moment they can be shot at or meet some environmental hazard is so much more effective in this format. The huge screen and clear sound make the experience completely engrossing. The large audience I was with was absolutely silent and hardly moving.

Acting throughout is superb with many well-known actors, including Benedict Cumberbatch, Andrew Scott, Daniel Mays and Colin Firth, leaving their egos behind and taking really tiny parts, presumably because they want to work with Sam Mendes. And the two young soldiers, played by George MacKay and Dean-Charles Chapman, are determined – in spite of being really scared – to succeed in their mission to get a message warning of imminent danger to another area where hundreds of soldiers, including the brother of one of them, are waiting to attack. They have to be warned against going forward into a trap set by the Germans in this terrible First World War.

A combination of many proprietary technologies and architectures – almost all of them inventions that are unique to IMAX – make this the most immersive movie experience so far! Called the IMAX Experience®, IMAX manufactures the highest-resolution cameras in the world; the IMAX’s Digital Re-Mastering process enhances the image and sound of the movie; IMAX’s revolutionary projection system delivers lifelike, crystal-clear images. These features, along with a powerful sound system using laser-aligned sound and customised theatre design which enable people to get a good view from all seats, make sure that seeing this beautifully directed film on the IMAX screen is a really great experience. And Sam Mendes, with his extraordinary filming alongside cinematographer Roger Deakins, has made it seem like one long take. This is unmissable.