Statistics state that somewhere around 5 in 100 people suffer from acrophobia (fear of heights), so plenty of people out there must have statistically had a pulse quickening experience with certain height-based features or movie moments. If you are one of said viewers, you might need to exercise caution around an IMAX from the 2nd of October and a general release from the 9th, as The Walk gently balances its way into cinemas. The film, directed by Robert Zemeckis (Back To The Future, Forest Gump), tells the true story of Philippe Petit (played by Joseph Gordon-Levitt), who walked a tightrope between the twin towers of the World Trade Centre in 1974. As you can imagine, IMAX 3D showings will be a seat grasping experience. So to celebrate (or in some cases warn people about) the film, Close-Up Film looked at our pick of 10 films that acrophobic people may be wish to give a miss.

Alfonso Cuarón’s awards-showered and contemplative space set Thriller Sci-Fi/Drama drew acclaim for its effects and scope but some may not have appreciated the immersive big screen experience. While floating around space may not confront audiences with the threat of falling per say it does (especially on the biggest screens and in 3D) have you drifting helpless alongside Sandra Bullock’s lead. Plus the many sequences of near peril will be enough to have some people nervously ducking debris and waving two fingers at the offers of journeys to space in the future. Best keeping your feet on the ground we say- less chance of floating away or burning up in the atmosphere that’s for sure.

Christopher Nolan’s entire Dark Knight trilogy (and all the Batman films for that matter) has had moments whereby our cowled hero takes the action to the rooftops. However the wide IMAX cinematography of the towering Hong Kong skyline and Batman’s (Christian Bale) death defying airborne acquisition of criminal accountant Mr. Lau (Chin Han) in Nolan’s acclaimed 2008 sequel, The Dark Knight, is enough to give some viewers nosebleeds. The same might also be said for The Dark Knight Rises (2012) too, which opens with a spectacularly intense and brilliantly assembled mid-air plane heist. The Dark Knight really does rise…like really, really, high.

The oldest film on our list and without doubt one of the most memorable, Fred C. Newmeyer and Sam Taylor’s silent Comedy Safety Last! has left an indelible imprint on cinema history. Most unforgettably the image of star Harold Lloyd dangling off the large clock tower above the moving traffic. The film really lived up to its title, as Lloyd performed some of his climbing stunts (dangerous considering he had already lost a thumb and forefinger by this point in his career). Safety Last! to this day is enough to encourage gasps and laughs in equal measure for its mixture of inspired stunts, brilliant physical Comedy and of course building side antics. Don’t look down Harold!

We have already introduced the story that makes up the basis for The Walk, so it would be an oversight not to include James Marsh’s excellent documentary about Petit’s death dicing balancing act. The film may not have big effects or 3 dimensional immersion but nor does it need them to make you feel uncomfortable as you watch the real footage of Petit’s barmy tightrope walk pan out. The film gives you insight into the man, his family and the planning of the walk itself but nothing hits harder than the sight of an unharnessed daredevil lying down in the middle of the tightrope between the buildings. Man On Wire is a mixture of intensity, entertainment and utter madness.

Alfred Hitchcock will forever be known as the master of suspense and while many may cite other films to back this up, the finale in his film Saboteur is a great example of why. Set atop the Statue of Liberty, 1942 audiences gasped and nudged to the edge of their seats as Robert Cumming’s Barry Kane confronted Saboteur Frank Fry (played by Norman Lloyd). The sequence capped off the twisting chase narrative but undoubtedly did so in ambitious and exciting style. Among the Hitch’s legendary body of work, this film is not quite as revered as some of his other films but to this day few movie scenes personify the term “high-tension” as much as this. Not to mention the scene is an enduring lesson in why you should never buy badly stitched suits.

We speak not of Disney’s snow-filled, sing-a-long, parent annoying hit but instead of Adam Green’s ski lift set Horror that may not feature the highest peril on this list but plays on a very real fear of numerous viewers…especially ones about to go on a skiing holiday! The film tells the story of a group of skiers who are trapped on a ski lift high above the ground, as temperatures are plummeting and the resort closes, not knowing these people are now stranded. It plays on a common fear of being trapped in the air and for some will put you off skiing for life…and yes there is an expected skin frozen to metal squirm-worthy scene thrown in to boot. Talk about being frozen in your seat!

Many people have claimed that the opening moments of Cliffhanger have only validated their acrophobia. The film by Renny Harlin (The Long Kiss Goodnight, Die Hard 2), stars Sylvester Stallone (who apparently took the role to conquer his fear of heights) as mountain climber/rescuer Gabriel Walker and the film featured much in way of altitude action. However one of the most effective uses of the Rocky Mountain setting is that opening, whereby Gabriel attempts to save his girlfriend Sarah (Michelle Joyner) after a high wire rescue goes wrong. Needless to say, he is unsuccessful and the fears of many viewers the world over are preyed upon. Thanks Renny.

This documentary about the pioneering and tragic 1924 climb of (the then unconquered) Mount Everest by British climber George Mallory and Andrew Irvine has its fair share of knee quivering moments. The IMAX Mountainside views are jaw dropping and nerve jangling but perhaps the greatest (or rather scariest) moments are found within the films secondary narrative of modern day climbers- Conrad Anker and young Leo Houlding- attempting to climb the mountain with the equipment Mallory and Irvine used. Two scenes in particular come to mind. First is a stomach knotting harness-free rock climb scene that introduces us to Houlding and the second a breath taking stumble by Anker near the summit of Everest that could have seen the climber fall thousands of feet, had he not regained his balance. Snow way we’d be climbing that beast.

In the most recent Mission: Impossible outing, this year’s excellent Rogue Nation, Tom Cruise’s super spy Ethan Hunt was seen grasping on to a jet as it set off. However the mighty Burj Khalifa climbing sequence in Brad Bird’s Ghost Protocol (quite literally) sets the bar to impossible heights as far as eye covering height-based thrills are concerned. The scene saw Hunt have to climb the world’s tallest building in Dubai and face many perils along the way. In IMAX you are literally clasped onto the building next to Cruise and rarely has cinema seen a moment that would even make some adrenaline junkies look away momentarily. The fact Cruise actually did the stunt work himself confirms one thing many of us may have already guessed about the action star- he’s crazy!

What else could top this list? Sure there are films with more nail biting high-up set pieces but few of the aforementioned actually delve into the nature of the fear itself. Hitchcock’s classic psychological Thriller not only gets into the mind of acrophobia, it makes it an integral aspect of the obsessive plot as James Stewart’s height fearing detective John Ferguson investigates a friends wife (played by Kim Novak) and things only get stranger from there. The opening alone is enticing and mesmeric in nature and Bernard Herrmann’s music only adds to this effect. Named the greatest film of all time (beating Citizen Kane for that accolade) by Sight & Sound in 2012, Vertigo is a twisting, distressing, compelling masterpiece. Its psychological power still lingers to this day and the film even innovated the dolly zoom or “Vertigo Effect” camera technique, to take the viewer further inside the mind of its acrophobic lead character. We’re sweating just thinking about it. 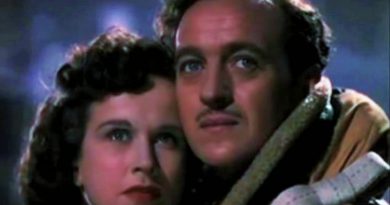